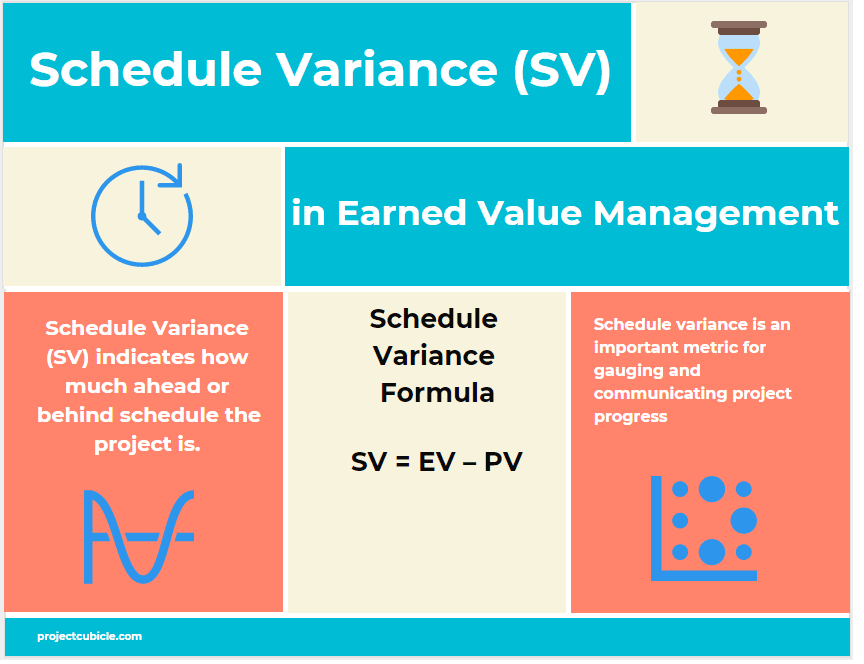 There are many tools and techniques used in project management to measure the performance of a project. One of the most popular tools for this purpose is the Earned Value Analysis.  This method allows the project team to measure the amount of work actually performed on a project in the correct way. While making performance measurements, Earned Value Analysis use the following parameters: Schedule Performance Index (SPI), Cost Performance Index (CPI), Schedule Variance (SV) and Cost Variance (CV). In this article, we will analyze the Schedule Variance Formula and Example to provide you a better understanding to help you to pass the PMP Certification Exam.

In the simplest form, Earned Value Analysis (EVA) can be explained as in the following scenario:

This simple example shows that you are in a good position considering the performance of your project. Because there is no delay in the project schedule and you spent fewer manhours than planned. Basically, Earned Value Analysis use parameters to breakdown a projects schedule and cost performance. Schedule Performance Index (SPI), Cost Performance Index (CPI), Schedule Variance (SV) and Cost Variance (CV) are the indicators of Earned Value Analysis (EVA) that enable to make mathematical calculations.

Schedule variance (SV) calculates the difference between the Earned Value (EV) (the value of work performed) and the planned value (PV). Although the variance in a schedule can be measured in time units, such as days and months, Schedule variance (SV) is expressed as a monetary value such as dollars.
SV is one of the essential outputs of Earned Value Management which informs the project teams how far ahead or behind the project is at the point of analysis.

Below is the schedule variance formula;

Now, let’s analyze the examples below for better understanding.

Assume that you have a construction project to be completed in 30 weeks. The estimated project budget is 450,000 USD. 10 weeks have passed and 180,000 USD has been spent on the construction works. However, only 20% of the project scope has been completed. Is your project behind or above the schedule?

Now we will calculate the project’s Schedule variance (SV)

Your project’s Schedule Variance is -60,000 USD and you are behind the schedule. Therefore you must perform schedule analysis to understand the root cause of the delay.

Assume that you are a project manager of a software development project. The project consists of 20 phases and all the phases must be completed in 20 weeks. The estimated project budget is 90,000 USD. 10 weeks have passed and 20,000 USD has been spent. Your team completed 14 phases.  Is your project behind or above the schedule?

Now we will calculate the project’s Schedule variance (SV)

Your project’s SV is 18,000 USD. This positive variance demonstrates that you are above the schedule. Your projects performance is good.

Note that this is a significant concept for the PMP Exam. Therefore you must understand the Earned Value Management Concept and its key aspects to pass the exam.