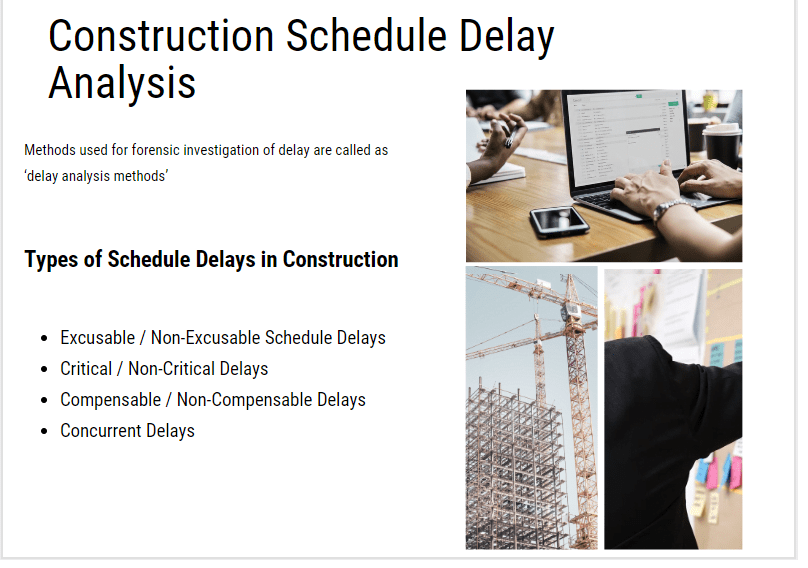 Delay is quite common, especially in construction projects. A delay can be caused by the client, contractor, and the third party or force majeure that nobody can control. Delay in the completion date of a construction project could lead to significant losses on society as well as the project cost. The damage caused by a project delay is compensated by the contractor in principle in the form of ‘liquidated damage’. However, the Contractor shall claim the extension of time or the recovery of a financial burden if the employer is liable for the cause of delay. In fact, a variety of factors cause delays in project completion such as complex interdependencies of a number of tasks. Therefore, determining what causes the delay and who is responsible for that is the first step of the dispute resolution process in construction projects. Methods used for the forensic investigation of delay are called ‘forensic schedule delay analysis methods.  In this article, we will talk about construction schedule delay analysis and types of schedule delays.

Types of Schedule Delays in Construction

Change orders, financial burdens, weather conditions, poor design, and lack of experience are common causes of delays in construction projects at any scale. Each cause corresponds to a particular delay. In order to perform a construction schedule delay analysis, you need to understand the effects of that factors. Classification of delays helps you to decide what type of analysis to be performed for the circumstance.

Below are different types of schedule delays

Non-excusable delays can be either compensable or non-compensable. Understanding the difference between Excusable and Non- Excusable Delays key to perform an effective construction schedule delay analysis.

A Critical Schedule Delay is one that impacts the project’s completion date. If it does not affect the activities on the critical path, it is a non-critical delay.

Concurrent Delays are reciprocal delays originated by the contractor and the client, that might affect the critical path of the project schedule and the completion date.

Critical inspections on a delayed project include the estimate of the necessary time for completing it and identification of the sequence of activities that triggers a shift in the overall project completion date. A sound estimate of project duration requires valid assumptions on how the project is carried out. CPM or Critical Path Method is one of the most common modeling techniques to determine a project’s completion date by calculating the critical path and total float.

In addition, it must prospectively forecast the likely effect of changed circumstances. CPM technique uses project network diagrams depending on primarily two variables which are activity durations and relationships. Given the set of activities involved in a construction project with those durations and activity relationships, the CPM uniquely derives the necessary time for completing the project. CPM provides a formal structure that systematically describes the project schedule in a way that can simulate the time impact of any change in construction project assumptions.

This blog post “Construction Schedule Delay Analysis” is written by our guest blogger “Ali Osama, Senior Planning Engineer”. We would like to express our thanks to him for his studies.