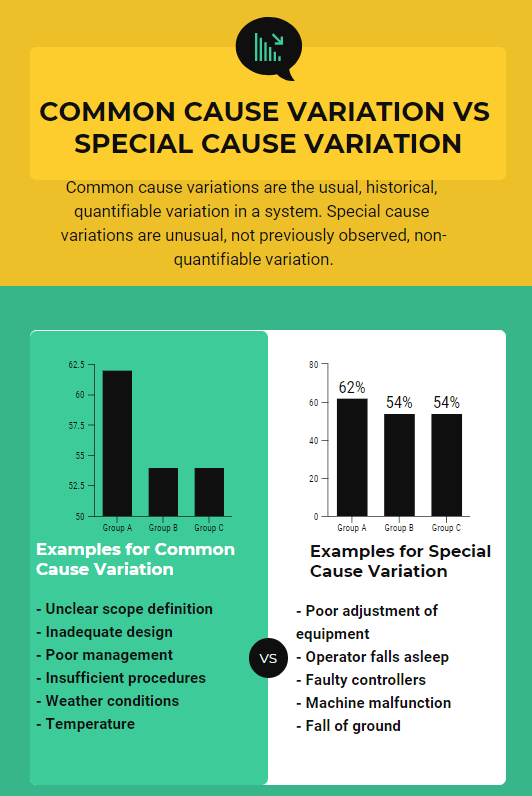 What are the causes of variation in quality control or what are the types of variation? The term “variation” is widely used in statistics, quality management, genetics, and even in biology. It refers to the measurement for a group of numbers that spread out from their average value. Every measured data set involves some degree of variation even if the degree is slight. It is a numerical value specifies how widely data in a data set vary. A small variance shows that data are closer to the average and a high variance shows that data are very different than each other. There are two causes of variation in quality control which are Common Cause Variation and Special Cause Variation. In this article, we will give examples of common cause of variance and special cause of variance for the control chart.

Classification of variance is very important in project quality management. Common cause of variance and special cause of variance have different origins. In order to take action to improve your process or prevent future problems related to variations, you must know the type of variation that will affect your processes. Walter A. Shewhart developed control charts to distinguish both variations in the 1920s. He discovered that all the processes involve common cause variation but some processes which are not in control show special cause variation.

Simply put, common cause of variances are normal, consistent and inherent in the process which can not be eliminated.

Note that if a process containing only common cause variation is said to be in statistical control.

Examples for Common Cause Variation

Assume that in a hotel construction project, you estimated 10 days to complete a formwork activity. Due to the climatic conditions, it is completed in 11 days. The completion time has not deviated too much from the mean. This is an example of a common cause variation.

Another example is that your team is working on a software development project. Due to the lack of coordination between team members, unclear scope definition and unexpected errors, you will not complete the project on time.

On a control chart special causes of variance indicates a non-random distribution around the control limit (or average limit).

Simply put, special cause of variance are caused by unpredictable factors that can not be foreseen with the help of historical experience and records.

Examples for Special Cause Variation

Assume that you are a project manager of a bridge construction project and you estimated 10 days to complete an excavation activity. When you started excavation, a technical problem occurred in the hydraulic system of the excavator.  This malfunction delayed this activity for about 20 days. The problem is solved by fixing up the hydraulic system. This is an example of a special cause variation.

Another example is that you were working with a shipping company to transport a generator for a hospital renovation project. Estimated time of arrival was 2 days. But the arrival of the generator took four days because of an accident on the highway.

Common and special causes are the two distinct origins of variation in a system. In a process, it is important to determine the type of variance because the course of action you take will depend on the types of variation. Using a control chart helps to distinguish Common Cause of Variance and Special Cause of Variance.

In this article, talked about the causes of variation in quality control and make a review for Common Cause Variation and Special Cause Variation. Note that this is an important subject tested on the CAPM and PMP Certification exams. We hope that it will be useful for passing PMP and CAPM exams.

Since 2004 I work for ICT Management which provides worldwide quality management service. Passionate about new technologies, i have the privilege to implement many new systems and applications for different departements of my company. I have Six Sigma Green Belt.