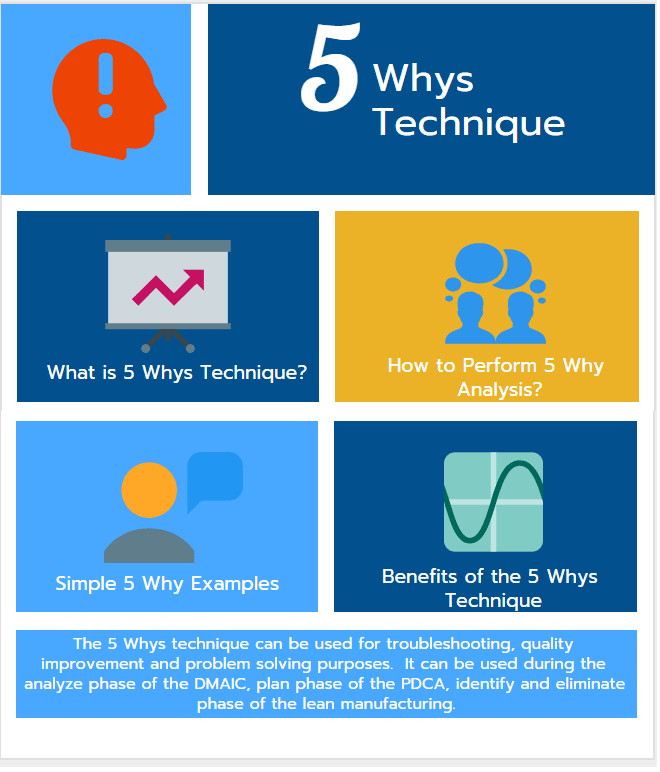 What is 5 Whys Technique and How to Perform 5 Why Analysis?

Unforeseen events or problems might occur in any process. Mostly things don’t go as planned. When a problem arises within a project, team members often find a quick but temporary solution in order to overcome it. However, quick solutions become useless due to the complexity of the problem as the project progresses. If the root cause of it is not being identified or addressed properly, it will occur repetitiously. In other words, if you don’t implement a permanent solution for the problem, it will repeat until being solved. 5 Whys technique is a simple tool that helps to eliminate problems by determining their root causes. In this article, we will discuss the 5 Why analysis and its implementation steps by using simple examples.

What is 5 Whys Technique?

5 Whys is a technique used to determine the root cause of a problem by repeatedly asking the question “Why”.
The technique was developed in the 1930’ s by Mr. Sakichi Toyoda who is the founder of Toyota Industries and then became a worldwide technique that is used by Toyota and many other companies today.

Basically, the 5 Whys relies on asking “Why” several times to understand all the signs of a problem. It is often used in conjunction with other techniques such as fishbone diagram, six sigma DMAIC, and Deming Cycle (PDCA).

When to Use this Technique?

The 5 Whys technique can be used for troubleshooting, improvement, and problem-solving purposes. Whenever a system or process doesn’t work properly, you can implement this technique to develop a solution. It can be used during the analysis phase of the DMAIC, plan phase of the PDCA, identify and eliminate the phase of lean manufacturing.

On the other hand, it is suitable for simple problems rather than complex ones. Because this technique directs you to track one or limited paths when, in fact, there might be several causes. In such circumstances, it can be a good idea to use 5 whys along with a fishbone diagram and/or Failure Mode and Effects Analysis (FMEA).

5 Whys is widely used because of its simplicity and flexibility. You can find the root causes quickly on the first try. Hence, when you spot a problem, try it before using a more detailed technique.

How to Perform 5 Why Analysis?

Below steps can be followed for making a 5 Whys analysis.

The responses of the team members should focus on the process and system errors. Their responses should not be affected by their biases and emotions. Otherwise, results may be misleading.

Note that there is no specific format used to document the 5 Whys exercise. Some organizations use their own detailed formats, others use various frameworks.

For a better understanding of the 5 Whys technique, let’s review the examples below.

Problem statement – The client refused to pay the progress payment.

The root cause of the problem is that we didn’t analyze the work schedule. Corrective action is to create good communication channels within the project team and assemble progress meetings regularly to avoid a lack of communication and coordination.

The below figure illustrates 5 Whys Example. 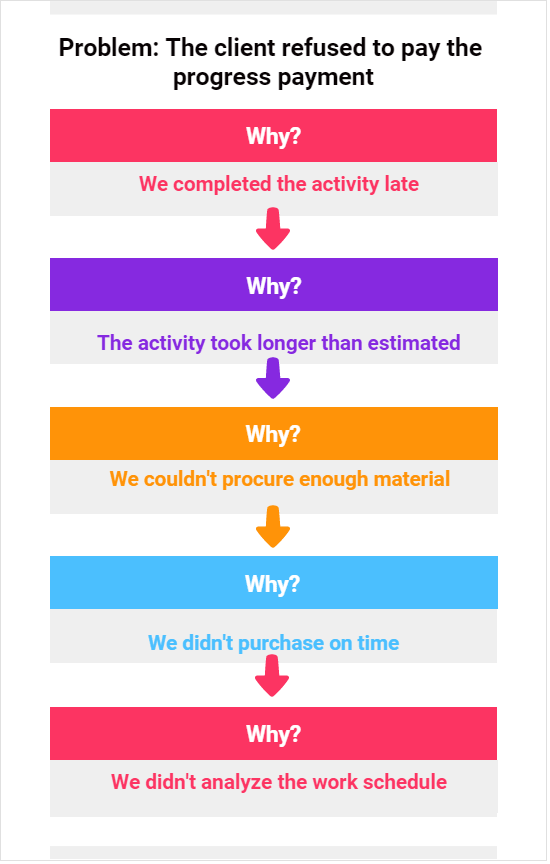 What are the Key Benefits of the 5 Whys Technique?

If you don’t analyze the root cause of a problem properly, you can not resolve it and it would return back in another form. Repetitious issues are often the predecessors of big problems. Although temporary solutions are easy to apply, they often become useless if the problem arises again.

In this article, we analyzed the 5 Whys technique with the help of an example. Basically, the 5 Whys analysis is an effective tool for determining the root cause of a problem. It can be used as a part of “The Fishbone Diagram” for problem-solving. Also, this technique is widely used in the analysis phase of the Six Sigma DMAIC (Define, Measure, Analyze, Improve, Control) practices.

If you want, you can share your experience and knowledge related to 5 Whys by using the comments box below.