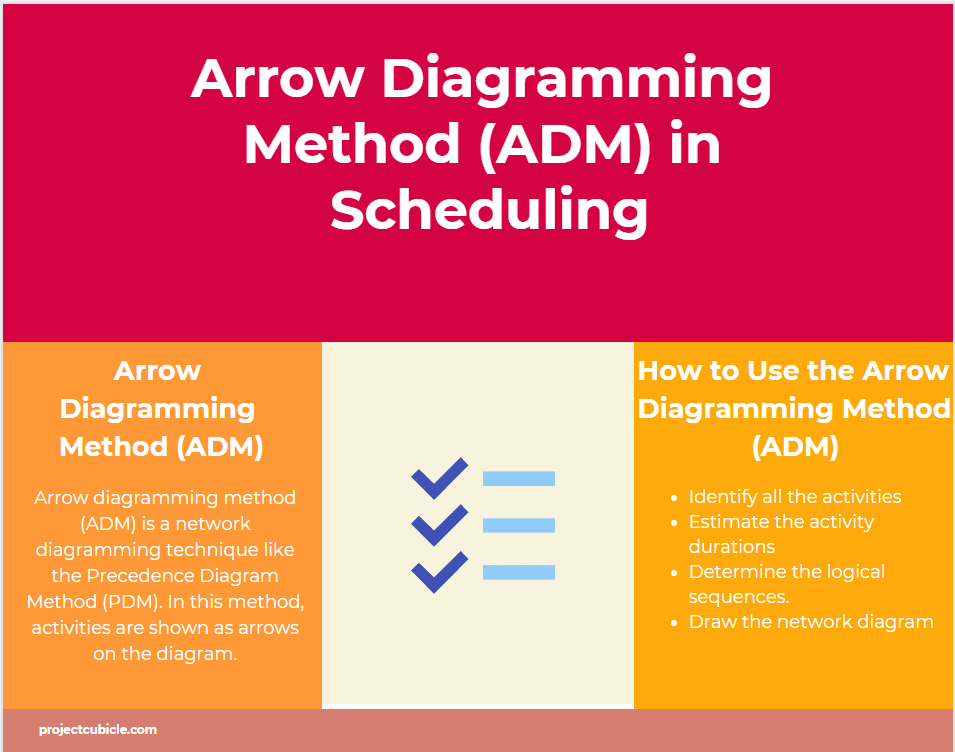 Arrow Diagramming Method (ADM) or Activity on Arrow Method (ADM) is a common scheduling technique used in project management like the precedence diagramming method (PDM). Humans are creating work schedules to track their project’s performance since the construction of the pyramids. In the beginning, they use quite simple techniques and charts to represent the work that needs to be done. After the usage of the first Gantt Charts which are the predecessors of the modern Gantt Charts, scheduling practices evolved and then project controls became an area of expertise. Unlike the first Gantt Charts, schedule network diagrams are created by establishing logical links between the activities in modern projects.

A project network diagram of a work schedule demonstrates the logical order that the activities will follow. It shows a sequence of tasks and/or deliverables required to complete the project. Basically, there are two common techniques to create network diagrams. These techniques are Arrow Diagramming Method (ADM) (or Activity on Arrow) and Precedence Diagram Method (PDM) (or Activity on Node). Schedule network diagrams enable us to determine the critical path of the project. The critical path is the longest path where a delay on it results in a project delay.

Arrow diagramming method (ADM) is a project network diagramming technique like the Precedence Diagram Method (PDM). Unlike the PDM, activities are shown as arrows on the diagram in this method. It has been used for a long time for determining the critical path, identifying resource problems, and analyzing feasible solutions when the approximate duration and resource requirement of all the activities are known. 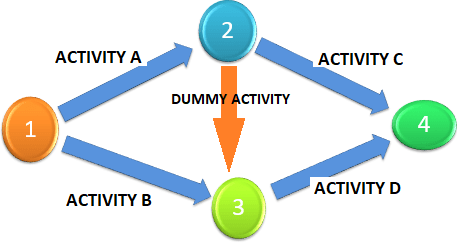 The circles numbered 1, 2, 3, and 4 are the nodes of this network system. They are the definable achievement in the project. Nodes have neither duration nor resource. Activities A, B, C, D are represented by the arrows. Each activity has a duration and allocated resource.

A dummy task is not a real activity that is added to represent dependency between tasks. It can be used to separate tasks or to keep the sequence correct. The duration of a dummy task is often zero.

When to Use the Arrow Diagramming Method (ADM)

Arrow Diagramming Method (ADM) shows the logical order of activities that helps to determine the critical path and identify the main problems related to resources and delays. From this aspect, it can be used for schedule compression practices such as fast tracking and crashing.

Arrow Diagramming Method (ADM) can be used to plan and track the activities within a complex schedule that includes many resources. For a successful implementation, activity durations, their sequences, and project execution strategy must be clear.

How to Use the Arrow Diagramming Method (ADM)

Below steps are used in Arrow Diagramming Method (ADM)

– Which activity will start first?

– Which activities will be performed simultaneously?

– Which activity will finish after this activity?

– Which activity will start after this activity?

Creating a table and organizing the columns with this information may be useful to save time.

The Arrow Diagram was a common visible and practical network diagramming method used in the past which was developed after the Gantt Charts (or bar charts). It was widely used in the past to identify the critical path of a complex project.

As a traditional project management technique, Arrow Diagramming Method (ADM)’ s popularity has fallen away because of the introduction of software solutions that can calculate the critical path of a project schedule easily and automatically. In this post, we make a short review of this important network diagramming method in scheduling. It is critical to understand the logic of network diagrams to create better schedules. For more, you can read the article related to the Arrow Diagramming Method Example.

[1] CPM in Construction – A Manual for General Contractors (Copyright 1965)

©2021 KLEO Template a premium and multipurpose theme from Seventh Queen

We're not around right now. But you can send us an email and we'll get back to you, asap.