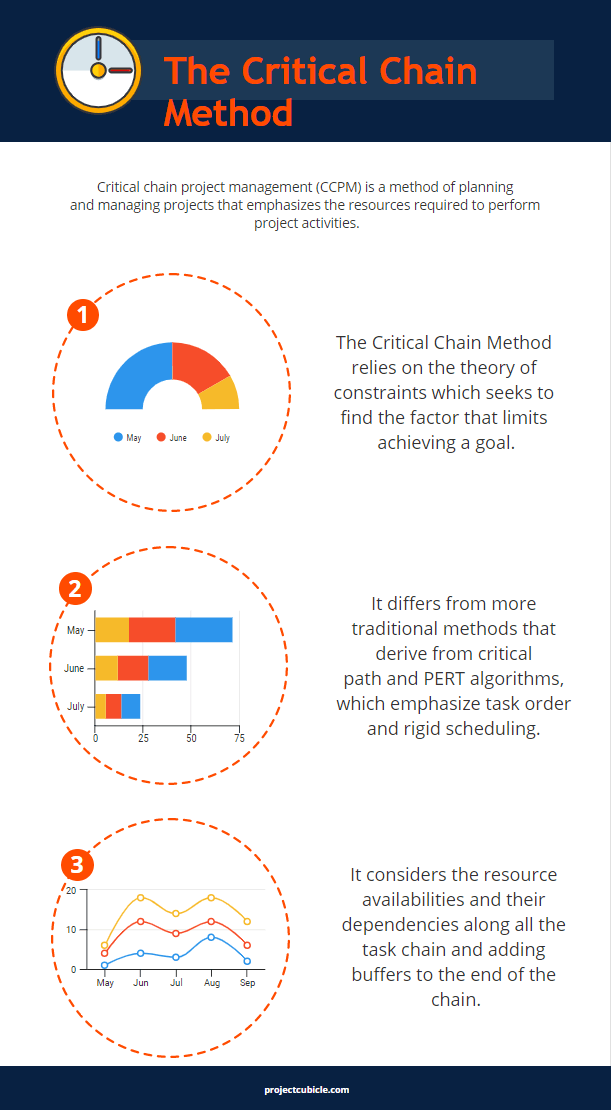 There are lots of project planning methods, tools and techniques available in the field of project time management. The Critical Chain Method is one of them which was introduced by Eliyahu M. Goldratt in his book “Critical Chain” in 1997. Unlike other books and guides written for project management, Eliyahu M. Goldratt wrote his book as a novel. He provided real-life examples to support his theory in Critical Chain (novel). According to him, the Critical Chain Method relies on the availability and leveling of resources required to complete the activities in order to complete the schedule. In this article, we will talk about the critical chain project management software discuss the differences between the critical path and the critical chain method.

However, this scheduling method relies on the theory of constraints which seeks to find the factor that limits achieving a goal. From this aspect, it is an alternative method to the standard and traditional methods.

The constraints that prevent to complete the project on time may include;

This method considers the resource availabilities and their dependencies along all the task chain and adding buffers to the end of the chain. Unlike the critical path method, the critical chain method uses buffers instead of slacks (floats). This method defines three types of buffers.

Project buffer is placed at the end of the project between the last task and the project finish milestone. If there is a delay in the critical chain, this buffer will act as a contingency to prevent the delays.

Resource buffer is a task which is placed before a critical chain task which requires critical resources such as labor, equipment, etc. 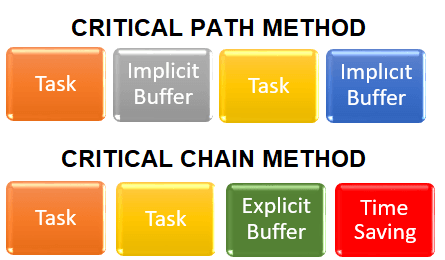 In the Critical Path Method, all the activities are sequenced in a network system and the critical path is determined by making mathematical calculations. There are no overall buffers added to the critical path but while estimating the activity durations implicit buffers are added to each activity in order to protect schedule from delays. This may result in too many buffers added to the schedule and cause an ineffective schedule.

In The Critical Chain Method, activity durations are estimated by considering the minimal time needed to perform the activity. A Project buffer is placed at the end of the project between the last task and the project finish milestone which acts as a contingency to prevent the project from delays. This will provide higher efficiency for estimating activity durations and resource needs. By the use of this method a more aggressive and efficient schedule can be obtained.

Floats or slacks are used in the critical path method. On the other hand, buffers are used to represent contingencies so that the project buffer is not zero on the critical chain.

According to the statistics and researches and only a few of the projects finish on time. Most of them completed after the planned finish date. The Critical Chain Method enables to develop a more effective and aggressive schedule by using the outputs of The Critical Path Method. This method helps to optimize resources and activity durations for a flexible and realistic schedule. It can be useful to apply both the critical path and critical chain methods while performing a schedule analysis. Because using both of them and comparing their results supports decision making within the project team.

In this article, we make a short review of the Critical Chain Method. We hope that it will be useful for improving productivity and decision making within the project team.

Linda Maltz is vice president of design and consulting at Cuboca, a project management training and consulting organization specializing in construction management and BIM. She is certified Primavera P6 Trainer.