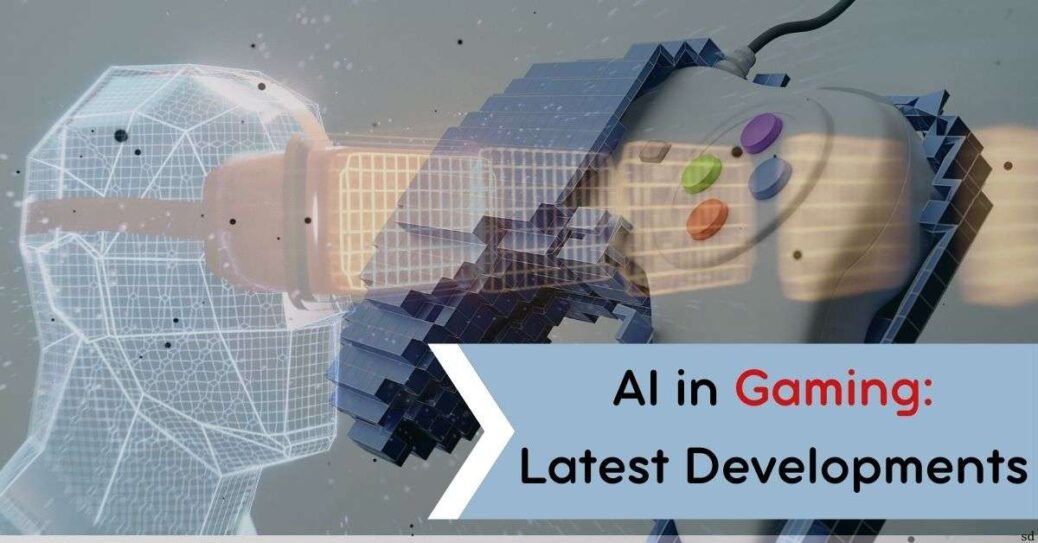 Sometimes, it is hard to imagine a world without playing some computer games that will take you out of this world and open doors to new universes that are beyond your imagination. However, in reality, it’s been only a couple of decades since the gaming industry has taken such momentum – which is a pretty short time in comparison to the long history of humanity. There are indeed video games since almost the 1950s. However, the golden age of gaming only started with the invention of the internet and, of course, the artificial intelligence (AI) technologies that elevated the gaming experience. The advantages of AI in gaming industry perfected the sector and created the gaming experience that we know today by presenting a bright future of AI in gaming.

According to research by Future of Humanity Institute, there is a 50% possibility that within 45 years the AI will outmatch the humans in all the tasks. This is such a bold claim and makes people wonder, what does AI do exactly to replace humans? The AI is trying to mimic humans by generating intelligent behaviors. When it comes to gaming, this aim of AI reflects as a form of interactive experiences that witness the non-human elements of the game being responsive and impactful within the game. They make the games more fun, unique and creative, which makes them a highly demanded quality when it comes to game preferences.

Origins of AI in gaming industry

Even though AI is still exploring its potential within the gaming industry, the initial idea behind the innovation goes way back, to the times when video games first emerged. In fact, since the beginning of the concept of video games in the 1950s, the developers have been trying to come up with programs that will act as humans within the game. They have also been working on programs that will be able to design the world of the games without necessitating a human developer in every single step. Although at first, these “dreams” have been regarded as impossible ideas that can only exist theoretically, within a couple of decades the developers managed to accomplish their desires.

The initial step in doing so was to acknowledge the fact that the academic AI is different than the AI that is being utilized within the games. The developers made this distinction from the very start of the concept by underlining that academic AI is working on concepts such as machine learning while the advantages of AI in gaming are attempting to provide a better gaming experience. After these conceptual differences, AI in gaming produced its first products in the game of Nim back in 1951.

Then, developers such as Arthur Samuel started to focus on checkers programs that will enable humans to play chess against an AI. Samuel’s work on the checkers’ program started in the 1950s and took its final form in the 1960s. However, the concept reached its peak only in 1997 when an IBM computer beat up Garry Kasparov in a chess match.

In the 1970s, when arcade games were highly popular, the idea of AI rivals in the games started to emerge. Space Invaders has become the game that made this concept known while its followers such as Galaxian and Pac-Man improved it. Games such as Karate Champ and First Queen enabled players to fight against an AI while Dragon Quest IV enabled the players to differentiate the tactics of different non-human actors, which eventually paved the way for action-role playing games.

All these games led us to the 1990s when the gaming industry flourished. In this period, multiple AI methods, from finite state machines to emergent behavior conquered the gaming industry. Suddenly, games started to have interactive stories with complex non-human characters that are shaping the plot of the game.

Especially the pathfinding and finite state machines have become the main elements of AI in gaming. While the former enables users to reach from the beginning to the desired end in a simple way, the latter suggests that the non-human actor can be in various situations and can shift within them. Another highly common usage of the AI in gaming is the concept of “hunting” in which the AI is going after the player by tracking down him/her.

The reason why AI in gaming is so highly regarded is the fact that it improves the experience of the players immensely. It also allows players to enjoy a game on multiple devices such as mobile phones or VR headsets without requiring consoles or regular computers. It turns this made-up fantasy world into a reality for the players as everything within the game gains a personality thanks to the improved AI. The intelligent personalities of non-human characters make the games more realistic than ever and increase the enjoyment of gaming beyond imagination.

Although these features also cause people to be addicted to gaming, we need to acknowledge the fact that the future of gaming is revolving around AI that is being transferred into virtual and/or augmented realities. Thus, the advantages of AI in gaming are crucial for the entire industry and upgrades itself every single day.

Advantages of AI in gaming

Recently, we see a rise in AI in gaming that lifts the burden of the developers remarkable as it takes an active role in the world-building and the story-telling aspects of the game. That is to say, procedural storytelling eases the job of the developers who suffocated with the rise of open-world games that have dozens of characters and multiple complex plots. Thanks to the procedural storytelling, many features within the game are handled by the AI while the in-game control is mostly on the player himself/herself whose unique choices determine his/her experience of the game.

We also started to see the transfer of machine learning – that is being used in academic AI mostly so far – to the AI in gaming, which has been revolutionary for the entire industry. However, it should be noted that despite all the developments in the sector, the aim of the future of AI in gaming is never to have a perfect, modern AI but to have complicated structures that lead to different outcomes.

The reason why the developers are avoiding highly intelligent AI programs that can perfectly replicate humans is the fact that they can easily turn the games into an unpredictable mess. The highly intelligent AI may also play the game in a way that would ruin the experiences of human players since it would be perfect in everything. Therefore, the developers prefer a moderate AI that is still under control and doesn’t take the fun out of the players while still providing a highly realistic gaming world.

Future of AI in gaming

Currently, the developers are working on an AI that will enable them to test games before they are being marketed. It would be a game-changer in the industry to achieve such an AI as these non-human players can detect bugs or clear out the kinks within the game and thus, perfect the game itself before its release.

Another recent remarkable improvement in AI in gaming is the opportunities that machine learning provides by allowing to analyze the in-game analytics. This innovation has the potential to enable the developers to test the player’s demeanor and change the game based on this analysis. The improvements in the generative adversarial networks (GANs) are also highly promising as they allow developers to replicate tropes to the point of the originals indiscernible from the imitations.

Nevertheless, the ultimate desire in the future of AI in gaming is to achieve a non-human character that is true – and only – being powered by AI as well as an AI program that will improve and shift the game based on the player’s preferences without necessitating any human developers. Although the perfected versions of neither of these are available today, the sector is improving vastly and it is only a matter of time to have AI in gaming that is being dreamed of since the 1950s.