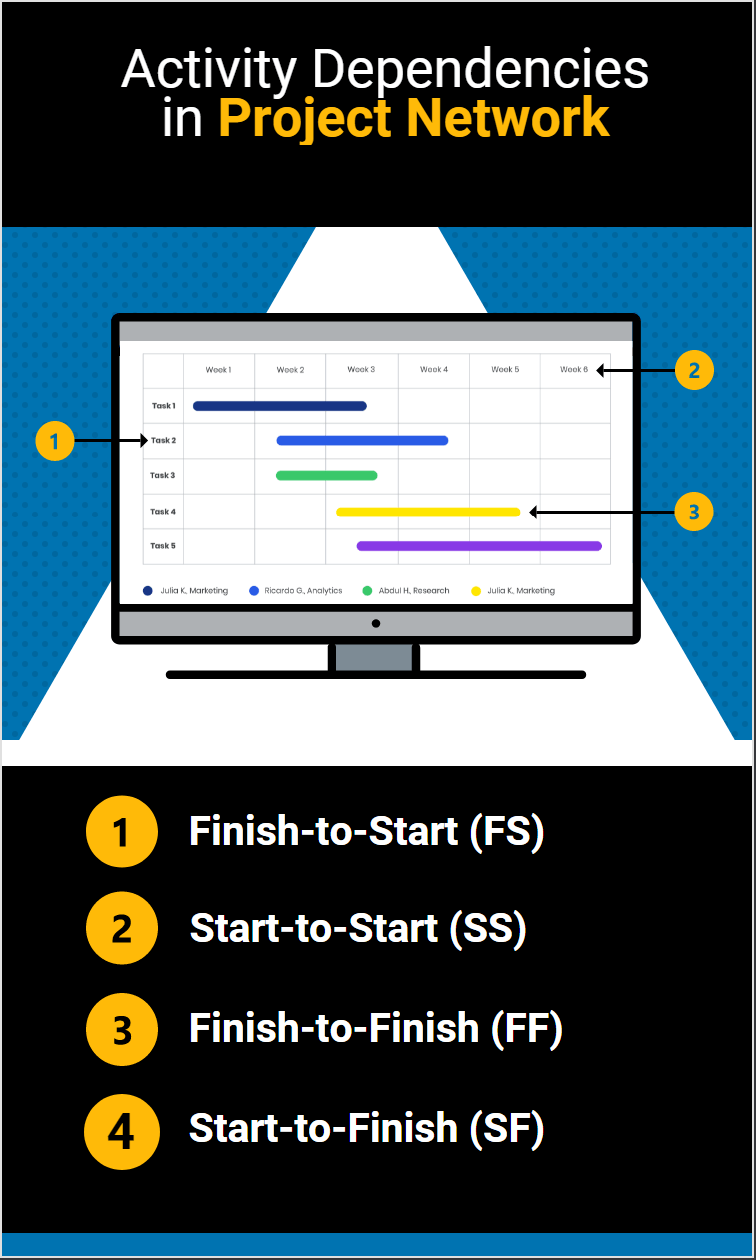 Projects consist of activities that depend on each other. These activity dependencies dictate the constraints on the order of activity execution. The constraints that are described in the PMBOK Guide and other project management standards and can be set in most scheduling tools will be called traditional here. Other types of activity dependencies in project management are not common and will be described in a separate section of this article.

Most common types of activity dependencies supported by most scheduling tools include:

Please note that all these dependencies are of No Earlier Than type. It means that the successor can be executed any time after the dependency condition is met.

These dependencies link the starts or finishes of dependent activities.

Acitivty Dependencies in project management can have Lags or Leads.

A lag is an amount of time that must be added to the moment when dependency condition is met before the linked event (successor activity start or finish) can happen.

A lead is an amount of time that must be deducted from the moment when dependency condition is met before the linked event (successor activity start or finish) can happen. Leads can also be called negative lags.

Both lags and leads can have their own calendars. Most scheduling tools suggest selecting calendars of the predecessor or successor activities, or to use 24/7 calendar as a lag or lead calendar.

Dependencies can be Mandatory (Hard) and Discretionary (Soft).

Mandatory dependencies usually reflect technological restrictions on the order of activity execution, safety requirements, contract conditions, or other constraints that must be taken into account. An example: one cannot process information until it is delivered.

Discretionary dependencies reflect preferential logic: the order of activity execution is selected based on discretionary reasons. An example: A-B pipeline can be built starting from point A or from point B. After the direction is selected, the order of construction of the pipeline sections is defined and this order must be set in the project model.

When a project belongs to a program or project portfolio, its activities can depend on other projects’ activities. These dependencies are called external.

Traditional activity dependencies in project management link activity start and finish points with time lags. In real life, however, other types of dependencies and lags exist too.

Double Lag or Point-to-Point dependencies link intermediate points of dependent activities (e.g. 60% of an activity’s volume of work must be completed before the completion of 20% of the successor’s volume of work).

As was already noted, all types of dependencies define Not Earlier Than constraints on the order of activity execution. Spider Project users, however, can also set strict dependencies.

Strict Dependency defines the Just In Time constraint on the order of activity execution. In particular, if two activities are linked with a strict FS dependency, the successor activity must start immediately after the predecessor’s finish instead of No Earlier Than. If for some reason a successor must be delayed, the predecessor must be delayed too. Activities linked by the strict dependency are “glued” to each other.

FS dependency is the most common. It means that a successor activity can only start after the preceding activity is completed.

Most dependencies in the detailed schedules of most projects are of FS type.

SS and FF dependencies mean that activities linked by these activity dependencies in project management can be executed in parallel but usually with some time or volume lags between their start or finish points.

Let’s discuss these dependencies, using a small sample project of construction of a 10-km pipeline section.

This project consists of the following activities: Trench Digging, Pipe Welding, Pipe Joint Coating, Pipe Lowering into the Trench, and Backfilling. The crews assigned to these activities have different productivities that define activity duration. These crews use heavy equipment and, for safety reasons, they must maintain at least 500-meter distance between them.

It means that the successor activity can only start after 500 meters of its predecessor’ volume of work are completed. If an activity’s volume is measured in different units, it is necessary to determine the volumes (in our case, number of joints or cubic meters) that correspond to 500-meter distance.

The network diagram of our sample project is shown in Exhibit 2. Driving dependencies in this diagram are shown with bold arrows, and you can see that SS dependencies are driving dependencies for all activities except Pipe Lowering into the Trench. For this activity, the outbound FF dependency of the Joint Coating activity is driving.

We have created both SS and FF dependencies between the same activities. It is not permitted in some software tools like MS Project, but there are workarounds such as adding a milestone activity with an FS dependency from the successor activity, and linking the predecessor to this milestone with FF dependency.

Volume lags do not exist in most scheduling tools. Therefore they can be replaced by the time lags that reflect the duration of work performed over 500-meter distance by the preceding and the succeeding crews. Time lags, however, require special attention during project execution because the work is rarely performed exactly as planned. Time lag can expire before 500 meters are completed, and therefore the values of time lags would require frequent adjustments.

This schedule can be improved by increasing activity duration.

In Spider Project, this function is schedule adjustment. Adjusted schedule is shown in Exhibit 3 where grey bars show the dates in the initial schedule.

You can see that the Pipe Lowering activity duration increased by 3 days, which caused a 3-day reduction of project duration. Resources assigned to this activity dependencies in project management will work with a partial workload.

In many cases it is reasonable to synchronize durations of activities linked by both SS and FF dependencies. To achieve this, one may need to adjust the workloads of assigned crews.

Dependencies that require the synchronization of duration of activities linked by both SS and FF constraints are called ladder relationships.

SF dependencies are rarely used and, in most cases, are used erroneously. That is why they should better be avoided. Nevertheless, in some cases SF dependencies define real-life constraints that exist in some projects. This type of dependency is used to control the changeover between two processes when the finish of an activity depends on its predecessor start.

An example: Contractor Site Security must be prolonged until Owner Security is in place.

A successor activity in this dependency is usually of the hammock type with elastic duration.

PMP, GPSF, GCMF, Founder of Moscow, Russia PMI® Chapter
General Manager of Spider Project Team – the leading Russian project management consulting company with branches an partners in Russia, Brazil, Colombia, Kazakhstan, Romania, and Ukraine.
Spider Project Team developed Spider Project, most powerful professional Project Management software package that is now used in 36 countries.
An author of 4 books and more than 150 papers on Project Management.
Speaker at many PMI® and IPMA Congresses and Conferences since 1994.
Involved in management of many large scale projects including the development of Russian Pacific Area, preparation for 2014 Winter Olympic Games, construction of all stadiums for 2018 FIFA World Cup, etc.
Has an experience of managing projects in many application areas including aerospace, construction, mining, manufacturing, oil&gas, shipbuilding, software development, telecommunications.