YOUR BUSINESS IS ADRIFT; WHICH LEADER WOULD YOU COOPERATE WITH?

“New research suggests that the most effective executives use a collection of distinct leadership styles – each in the right measure, at just the right time. Such flexibility is tough to put into action, but it pays off in performance. And better yet, it can be learned.”

What if you were a major Stakeholder with a Financial Crisis in hands?

Leadership is roughly based on 3 things: inference, experience, and instinct. Predominantly, one single thing is asked of leaders; that is, to get RESULTS. Leaders’ ultimate goal is to build a culture where their missions are realized and the contributors, stakeholders and team members, are motivated. We have talked about Leadership prior to this article. Here, our solemn goal is to magnify the relationship between Leadership and Emotional Intelligence. How are we to bring our wishes to life? We begin by examining Goleman’s 6 Distinct Leadership Styles, each emerging from diverse elements of Emotional Intelligence. However, it is important to emphasise one thing: best leaders do not depend on one style and instead merge them effortlessly, applying them in the right moment. You must carry them everywhere in your mind but know when to harness which approach.

What if You Needed a Leader? ASAP.

Assume that you are the major Stakeholder of a High-Tech company in a financial crisis. Your sale reports are melting in themselves and your revenues are disappearing into thin air.

The market has changed. You are no longer producing the needs of your users. Something has to be done but what could it be?

As a first action, you have asked your current CEO to take a permanent leave of absence and now you are face-to-face with a long list of candidates for the position.

You now must choose a leader from the pool of candidates and trust that they are going to save the day if nothing else.

After burning the midnight oil, you have shortened the list to 6 official and 2 additional candidates to be interviewed and their skills to be tested in a simulated environment, which one of them will be getting the spot, and the responsibility to save the company from this crisis.

As a Stakeholder of this company, it is essential that you choose the right person. Otherwise, the crisis will take over and you will have to live under the threat of bankruptcy.

To choose the best candidate, your human resources department presented you a research, and with this research you have realized you have not been putting sufficient emphasis on Emotional Intelligence and the former CEO also was in deficiency of these skills. You have now started to read the highlights your team has gathered, considering 6 official and 2 additional candidates you are going to convene with.

GOLEMAN’S PRIMER: WHAT IS EMOTIONAL INTELLIGENCE?

As Goleman stated below, emotional intelligence is the ability to administer our relationships with ourselves and people surrounding us operationally. Emotional Intelligence is based on four elements: Self-Awareness, Self-Management, Social Awareness and Social Skill. 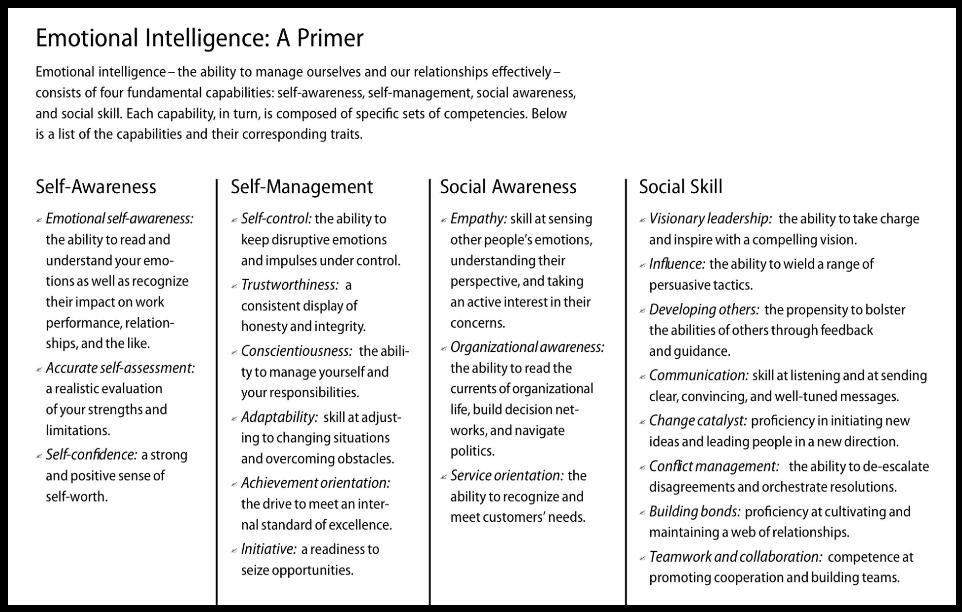 We will not be examining these concepts in depth as we have set sails to understand the relationship between Leadership and Emotional Intelligence.

As the cubicle team, we are also rooting for you to choose the best possible candidate to save the day and we would like to let you know that unfortunately you have run out of time.

Your 6 official candidates are now waiting for you, just behind that door. It would not be kind of you, as the Stakeholder of a company in financial crisis, to keep them waiting any longer.

You welcome the first candidate into a simulated project management environment.

The first candidate seems so eager to save the day. Her drive to complete the project on time is incredible which leads her to be extremely demanding of the colleagues. She frequently orders team members in a strict manner to assure a task is done. The overall impact on climate however is unfortunately negative.

You seem to have a short while for yourself. Why don’t we examine the notion of “climate”, making a good use of our time?

THE NOTION OF “CLIMATE”

This notion was primarily defined by psychologists, Litwin and Stringer and later renewed by McClelland and his colleagues. It implies 6 key elements that influences an organization’s working environment: flexibility, standards, responsibility, accuracy, rewards and commitment.

What a long day! You have interviewed the last candidate.  (See the full candidates in the video.)

She constantly asked her colleagues about their honest thoughts which surprisingly ended in getting no actual work done.

Now, have you made your choice? Which candidate proved themselves worthy enough to save the company from this financial crisis?

Cubicle Team is here for you. Let us investigate it together, shall we?

Now, let us see these candidates getting to know who, more importantly what they are. Candidate 1 was Coercive; she demanded immediate compliance and was strictly focused on getting the job done. Candidate 2 was Pacesetting; frequently called as an “idealist” or a “perfectionist” in the common tongue, she wanted all her colleagues to share the same self-directed growth mindset. Candidate 3 was Authoritative; he had a real vision and proved himself ready to mobilize the resources as needed to save the company from a possible crisis. Candidate 4 was Affiliative; he was genuinely interested about the emotional state of his team members and he offered emotional support while they worked together. He also created harmony between all his team members and the project was completed in harmony, leading to formation of outside-office bonds. Candidate 5 was Democratic; she was very keen on what her members thought about each steps of the project and was highly enthusiastic to get constant feedbacks on her leadership. This might seem like the best option however her approach resulted in no visible progress. Finally, Candidate 6 was Coaching; he cared about the growth state of his team members and was ready to assist them, giving short motivative speeches occasionally. He asked where team members designated themselves in a few years from now on and which steps were they taking to get there. In doing so, he observed their current skills and abilities and determined what could work best for them to continue their learning in their present positions. Coaching approach, however, does not work in individuals with fixed mindset or if they are resilient to change, and that is what occurred in the simulated case of Candidate 6.

Okay, so… Where are we, really, getting at?

What is the Right Way of Applying Emotional Intelligence into Leadership?

According to Goleman, these approaches should not be used by themselves and instead they should be in equilibrium with the rest of them. The real reason we have simulated a case is that there is not a single way to make it work, the thing here is to swap between them seamlessly, like turning pages. The last additional 2 candidates symbolized the need of cooperation between these approaches. Both had the rational knowledge of these approaches; it was certainly going to be a tough challenge. However the importance lies on the skill to make use of these 6 Leadership Styles, in the right setting.

With that, let us conclude here for now.

A Final Summary for you, by the Cubicle Team:

Which approach(es) seems more applicable to you?

Which ones were you seamlessly applying and which ones are you now considering to apply?

It is highly recommend that you see the original article in HBR, cited below.