A RACI matrix is a chart that demonstrates the roles and responsibilities for each item such as tasks, activities, decisons, etc. for a project. It is used to clarify who is responsible for which task at which level. Thus, you can get rid of a number of issues that originated from poor communication. As a project manager, you can obtain many benefits by creating a raci matrix (RACI chart or RACI diagram) by knowing Who’s doing what? Although having a raci matrix makes your life easier, it might be difficult to create it at the beginning of a project. In this article, we will discuss the advantages and disadvantages of raci matrix and provide steps to answer how to create it.

What is exactly a raci matrix?

People who are responsible for doing tasks or making decisions. Each task requires a responsible person.

People who are responsible for the completion of the task or deliverable. They are people or a group of people who owns the task. The responsible person delegates the work and reviews everything before its completion. In some conditions, the responsible and accountable person can be the same.

In a project, tasks may require someone who is responsible for consultation. People who have the consulting role assist the responsible. They provide information to complete the task or deliverable.

RACI defines the tasks, deliverables, and responsibilities of each role involved in the project. 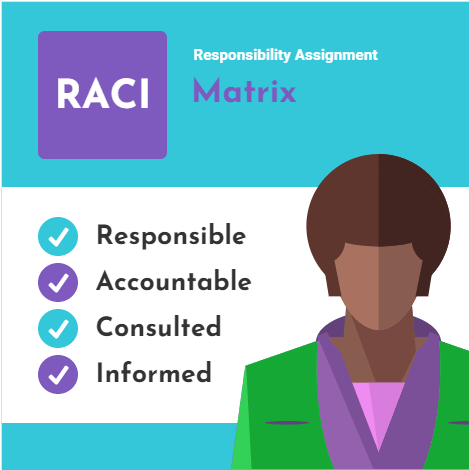 What are the advantages of a raci matrix?

Having a raci matrix in place provides many advantages to a project manager. Below are a few of them;

It is difficult to get opinions from everyone and incorporate their point of view, especially in sophisticated projects. This is where you need a raci matrix. You can avoid people overload by involving them in the process according to their roles in your project.

Using a raci matrix helps to set expectations for who is managing or responsible for the task. People can easily understand where they will be involved, and for which tasks. By this means, it helps to eliminate confusion by knowing who is responsible for which task. Also, stakeholders can easily understand what information they will receive regarding the project.

Disadvantages of the raci matrix

The raci matrix may have some disadvantages. Below are some of them;

When Should We Use RACI?

A raci matrix brings complexity and process to the projects. This may slow down the speed of small and fast-moving projects. Therefore if the team is small, you can clearly define the roles and responsibilities by just assigning tasks to team members. You don’t need to define every process and detail.

Large and complex projects involve various people and stakeholders. This is where a raci matrix can be useful. Because you need to define the responsibilities of people clearly. Otherwise, you will face confusion and problems among people.

In brief, the raci matrix is not necessary for every project.

How to Create a raci matrix?

Creating a raci matrix is not a difficult job if you follow some basic steps.

Step 1: Identify the roles of the project

The first step of creating this matrix is to identify the project roles or specific people. You can create a simple table to list who are involved in the project. You can use names instead of writing the roles. In some circumstances, one team member may fill multiple roles. Likewise, multiple people may fill just one role.

Step 2: Identify the tasks and deliverables of the project

Before to start creating a raci matrix, it is a good idea to breakdown the project deliverables into meaningful sections. You can place the deliverables on the left column and the names or roles at the top.

Step 3: Assign tasks to each role

Think about the different tasks that you have listed and the people who are responsible for them. Every task should have at least one responsible or accountable person. Note that there is only one role or name assigned to accountable.

Once you have created the raci matrix, share it with your team to gather team thoughts. This is very important because everybody should understand their roles and responsibilities.

Arrange a meeting to discuss the raci chart with your major project stakeholders. Try to arrange a short meeting to avoid time-consuming discussions.

Step 6: Keep the chart updated through the life cycle of the project

Responsibilities and assignments may change as the project progresses. New members may join the team and some of the members may leave. Therefore, you need to keep the chart updated and modify it when needed through the life cycle of the project.

Raci is a useful chart to manage people with different roles within a project. It is a project roles and responsibilities matrix. However, raci matrix has some disadvantages. Many experts find it very difficult to use because it requires a huge effort to determine who is responsible for which role or task.  RASCI, CARS, RAS, DACI, and CLAM are the alternative charts that might be used instead of RACI. In this article, we discussed the advantages and disadvantages of raci matrix.

Did you use the raci matrix before? What kind of problems did you face by using the raci? or did you obtain benefits of using this chart? Let me know.