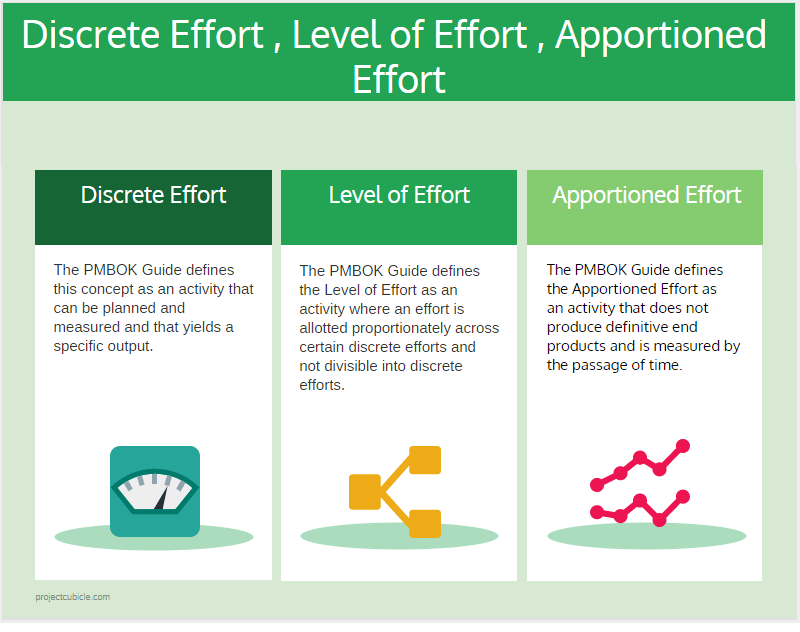 Earned Value Management is a significant concept from a PMP Certification Exam point of view. Therefore PMP aspirants should know the basics EVM concept and remember the number of formulas in order to pass the exam. Level of Effort, Discrete Effort, and Apportioned Effort are used for Earned Value Management calculations. They are three different activity types widely used to measure the project performance and Earned Value of a project. However, these activity types are not well understood and always confused by PMP Aspirants. The purpose of this article is to explain both concepts, analyze their differences and provide level of effort, discrete effort, and apportioned effort examples.

The Work Breakdown Structure (WBS) represents work packages which are arranged in a hierarchical way. Activities that need to be scheduled are grouped under specific WBS levels. In other words, activities are contained in the lower level of WBS. These activities are categorized as Discrete Efforts, Level of Efforts and Apportioned Efforts depending on their nature and roles within a project schedule.

The PMBOK Guide defines this concept as an activity that can be planned and measured and that yields a specific output.

Earned Value of this activity can be calculated by using its own planned quantity.

The PMBOK Guide defines the Level of Effort as an activity where an effort is allotted proportionately across certain discrete efforts and not divisible into discrete efforts.

Below are some examples of Level Effort activities :
• Project Management
• Accounting
• Administrative works

Level of Effort vs Discrete Effort vs Apportioned Effort

In order to perform accurate Earned Value Management Calculations, you need to define the type of each activity clearly in the “Define Activities” process. Because the type of activity effects the method of performance measurements and EVM Calculations.

Note that these concepts are very important for the PMP Certification Exam. You may encounter more than one questions during the exam. If you want to add anything ot share your opinions regarding the topic, you can do so through the given comments box.

How to make earned value work