Organizations across all the industries use Earned Earned Value analysis techniques to understand the health of their projects. Customers and/or the stakeholders usually ask Project managers the following famous questions:

One traditional technique often used by project managers is to compare the planned and the actual cost curves to answer.

If the actual cost is less than the planned cost, can we say that the project’s cost performance is well ? or are we ahead of schedule?

The planned and the actual curve comparison is not enough to understand how the project is going. Let’s go deeper into the topic and analyze “Earned Value Management” and formulas first, then, make the Earned Value calculations by using an example.

Common project management methods use the actual vs. planned model to monitor how the project is successful from a budgeting viewpoint. But these kinds of traditional methods do not keep in mind the value of the work performed in a given period. Earned Value Management (EVM) is a project management technique for measuring project performance and progress.

While using the actual vs. planned model, only the under or overspending can be reported. It does not show your progress performance. For instance, while being ahead of the plan and making enormous progress, overspending could be seen and as a result, the project will finish earlier.

However, if there is no method for understanding the value of work performed, you have no chance to report what the main reasons for the overspend are. Project percent complete values can be monitored from the work schedule but it is not easy to link this percent complete value with actual cost and budget.
For better understanding, let’s analyze a sample project in terms of actual vs. planned and use earned value to understand what are the benefits of this method.

Earned Value analysis uses three key metrics which are the planned value, actual cost, and the EV as illustrated in the figure below. 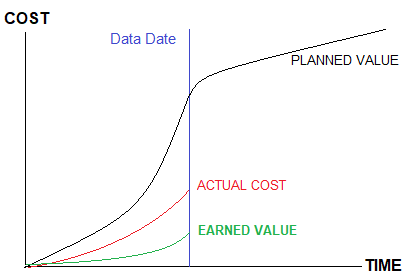 Earned Value (EV) is the percent of the total budget actually completed at a point in a given time. It is also known as the budgeted cost of work performed (BCWP)

If Cost Performance Index (CPI) is less than one and a negative CV means that the project cost performance is below the plan.

If the Schedule Performance Index (SPI) is greater than one and a positive SV means that you completed more work than planned. But don’t forget that SPI > 1 does not always mean that you are ahead of schedule. You should check the critical path and determine if you are behind or ahead of schedule. 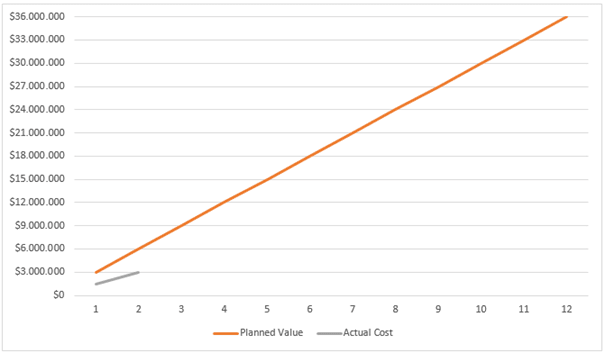 Let’s assume a 12-month railway project that is planned to spend $3M per month for a total budget at completion (BAC) of $36M. The project is 2 months along and according to the planned vs. actual cost figures is underspent by 50%.
We could assume therefore that the project is going well because it’s costing less than planned.

By taking into consideration this performance, this railway project will be completed in 54 months with a $36 M budget.

Earned value is a powerful technique that provides project information with the help of project schedule, planned value, actual value, and earned value calculations. It is widely used by stakeholders to understand the real performance of the project. Earned Value Management provides an early warning system for the project teams regarding the issues affecting the budget and schedule. This helps the project teams to employ methods to put the project back on track.

In this Earned Value Management tutorial we analyzed an Earned Value Management Example which emphasizes the benefits of this system in project management. At the beginning and the end of a project, because of the lack of coordination between crews and equipment, low performance will occur. It is better to be aware of delays in the early stages by using project management tools to ensure project success.

I am a Civil Engineer in HES Consultancy Limited, experience as Director and Resident of Works and Technical, Financial and Administrative Project Audit. I have skills in the area of Procurement, Tenders and Contracting. I am PMP and PRINCE2 Certified. Monitoring and Control with the Earned Value Method.