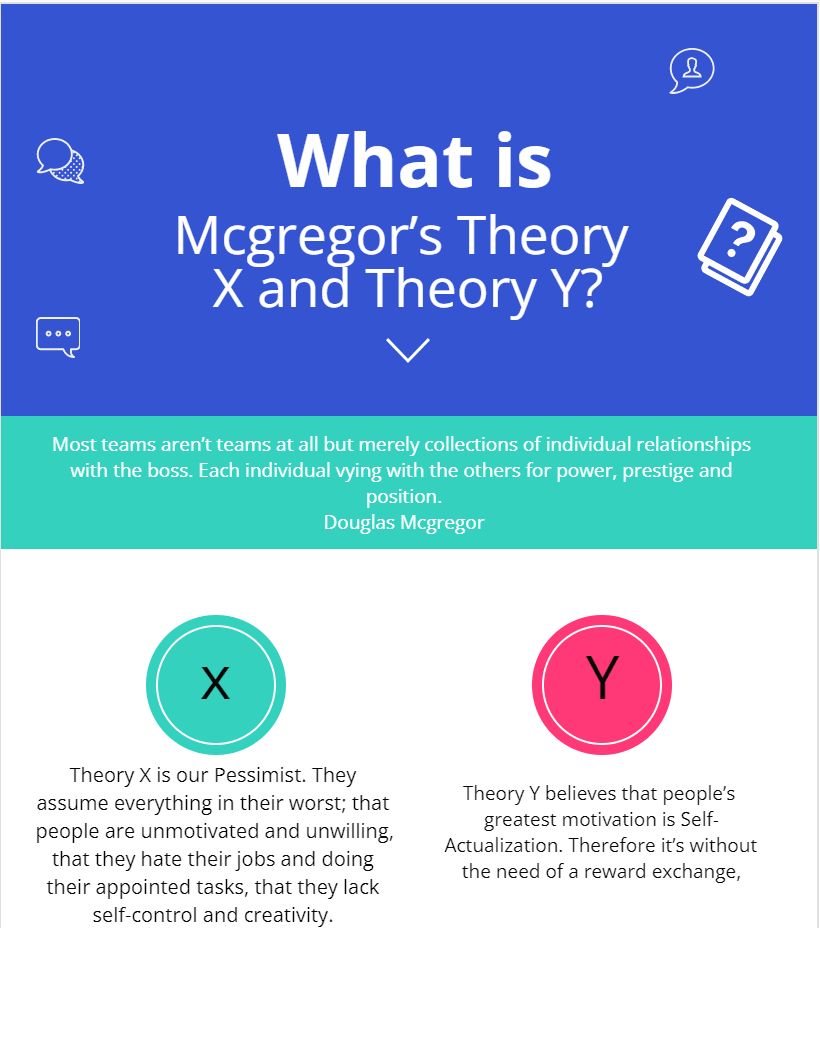 What is Mcgregor’s Theory X and Theory Y?

Theory X and Theory Y was first proposed in 1960, by Douglas Mcgregor. It was inspired by Maslow’s Hierarchy of Needs and its roots are also based in the Motivation Theory. Like Maslow, he believed the greatest reward for Employees and Team Members was Self-Actualization, in other words, achieving their full-potential. The principal foundation of Mcgregor’s Theory X and Theory examples lies in Distinct and Opposing Perspectives in both Motivation and Management of the Employees or Team Members. It’s simply the Approach to create The Most Productive and Most Productive Environment to achieve the Most Efficient and High-Quality Performance in the Workplace. 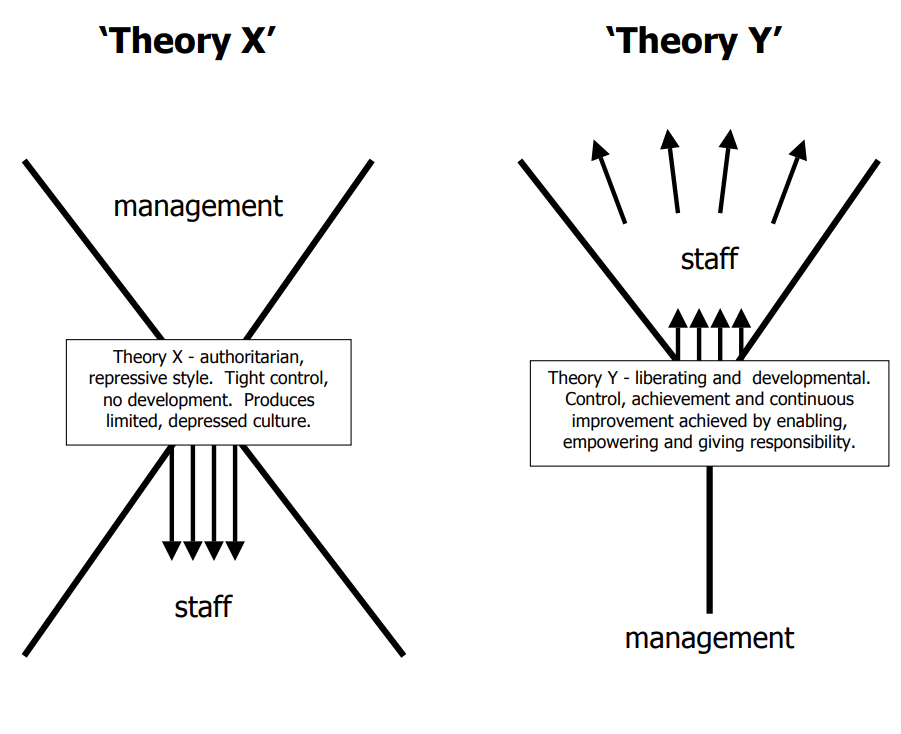 Before we move on, know that there are two perpectives at this.

The Manager’s and The Employee’s / Team Member’s.

Most teams aren’t teams at all but merely collections of individual relationships with the boss. Each individual vying with the others for power, prestige and position.

Theory X is our Pessimist. They assume everything in their worst; that people are unmotivated and unwilling, that they hate their jobs and doing their appointed tasks, that they lack self-control and creativity. They neither thank or appreciate the Team Members. There is a scene from Mad Men that explains this one perfectly.

Now as we see the Boss, Don is very agressive and wants immediate work from their employee, Peggy, in exchange for her salary. Peggy’s real motivation however is not the money, it’s the opportunity to Self-Actualize. For this reason, she cares about Don’s approval and appreciation as he is more experienced in his career journey. She aspires to become Don, the Creative Director.

However as you see,

Because they have a defined, unchangeable perspective about their employees. Therefore Don, the Theory X Manager assumes as below.

On the other hand Theory Y roots in the belief of Self-Actualization.

Theory Y believes that people’s greatest motivation is Self-Actualization. Therefore it’s without the need of a reward exchange,

As we watched the scene, Peggy is an example of a Theory Y employee. Her true potential is to become a Creative Director and she makes effort to accomplish and realise her potential and goal. She is trying to collaborate with her Manager, Don, in order to apply the best idea to their client’s job.

Nowadays, even if Theory Y is more common in the workplace, we should add that utilizing Theory X might be beneficial if the employee’s job is a manufacturing process or does not require creative, out of box thinking. It may seem inhumane at times but there are also Theory X employees in the workplace as there are Theory X Managers in the Organizations as much as Theory Y Employees and Theory Y Managers.

Below, we will try to exemplify the difference between a Theory X and Theory Y employee.

Let’s Review what we discussed on Mcgregor’s Theory X and Theory Y Examples!

We learned that according to Mcgregor, there were two ways to motivate people in the workplace. These were either providing compensation for their effort (i.e., salary, bonus, etc.) or giving a chance of Self-Actualization. We alo learned that there were 2 perspectives of looking at it: the Employee’s/Team Member’s and the Manager’s. Both could be Theory X/Y Employee or Theory X/Y Manager. When it comes to Mcgregor’s Theory X and Theory Y Management, we learned that Theory X Managers automatically assume that the Team Members are unmotivated on their own and therefore they need to be conditioned and enforced.

This part of Theory X is based on Behavioral Psychology itself and leaves less space for an individual to achieve their true potential as they are constantly given explicit instructions about their projects or tasks. Theory Y Manager however assumes the exact opposite. They believe that the Team Members are intrinsically motivated to do the tasks they were assigned to and that they are happy with their current job. For this reason, little direction is needed and Theory Y Manager confides in their Team Members. And the Team Member perspective is similar, Theory X Employee really does their best to avoid doing a job and you might catch them scrolling their social media feed instead. On the other hand, Theory Y Employee cares about doing their job as best as they can and they also care about receiving objective and constructive feedback from their Managers to improve themselves and Self-Actualize in the workplace.

And that’s all we have to say about Mcgregor’s Theory X and Theory Y Examples!

Which type of Manager/Employee do you think you are?

Which one is more efficient in the workplace?

Let us know in the comments below!

Emotional Intelligence in the Workplace