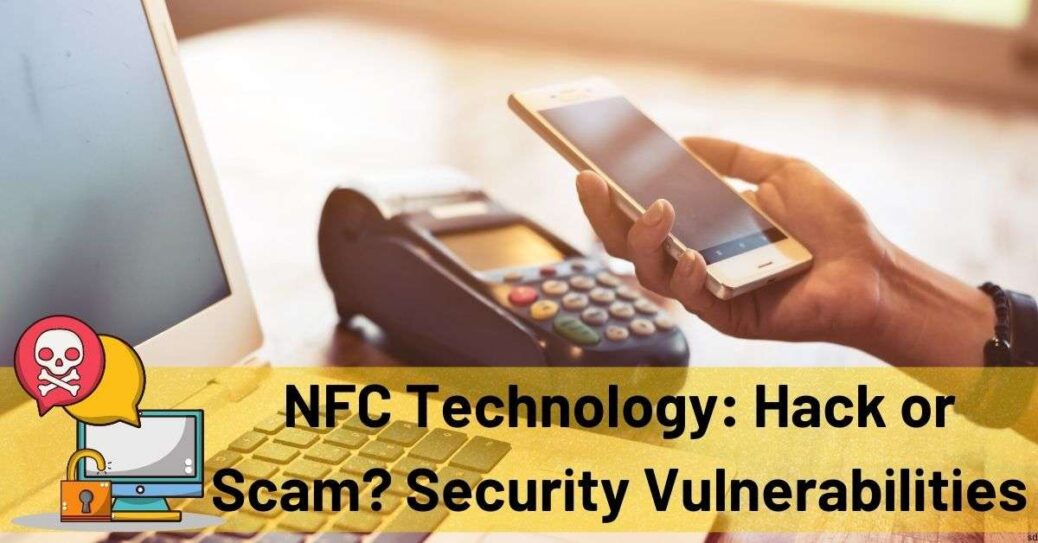 Near-Field Communication (NFC) technology usage is gaining popularity considering its convenience, social dis. As NFC chip applications gained popularity, attackers began focusing their efforts on NFC entities (such as NFC tag reader) to access any stored data. But what is NFC technology exactly? NFC is a cutting-edge technology that enables secure connectivity and ease of use. Nonetheless, this technology can potentially facilitate large-scale breaches such as scanning and other types of identity theft.

What Is NFC Technology?

Near-Field Communication (NFC) utilizes the widely accessible and licensed 13.56 MHz frequency to enable devices to communicate within 10 cm of one another. NFC performs a similar purpose as RFID (radio frequency identification). The capability of NFC vs. RFID to function in three distinct modes is a crucial benefit.

These may seem a bit theoretical but let’s look at daily usage of NFC technology and NFC tag reader below.

1. A Quicker Way For Connecting To A Wi-Fi Network

You are not required to jot down the secret Wi-Fi password and provide it over to your visitors upon their request. You may publish your details on a Wi-Fi label on Android by accessing the Wi-Fi settings. Anyone who contacts this tag through their phone will automatically connect to your network.

Regardless of how many alarms you set, if you still struggle to get out of bed in the morning, the Sleep As Android app can assist you. This software makes use of “Captchas” to determine whether or not you are still awake. Additionally, the application has a facility for processing NFC tags. To silence the sound, you should remove the slider on the phone.

You may customize an NFC tag reader with your contact information, social network profiles, and website URLs. This way, you’ll have a business card that you can edit and use to your advantage during business meetings.

Occasionally, you may wish to refer users to a different website. Your task is demanding, all the more so if the address is not straightforward. However, there is an easy method to accomplish this: just put the site URL you wish to redirect inside the NFC tag reader. Thus, when someone gets their phone close to the tag, it will immediately open without typing the page URL.

You may automate this process to save the annoyance of manually activating driving mode each time you enter your vehicle. There are several NFC tags available for this purpose. As you approach it with the NFC tag, the driving mode automatically engages.

NFC tag readers enable you to reach physical buttons located near your phone’s NFC chip. When you press one of these buttons, a previously defined job becomes active. For example, you can open the camera more quickly, call a friend or family member more quickly, or handle your responsibilities more conveniently.

It is a method of payment that requires the use of an NFC-enabled mobile device. If a venue accepts NFC payments, you can pay by bringing your mobile device close to the NFC device. Notably, it is less than or equal to around 4 cm in the NFC chip range.

Apple Pay, Android Pay, and Samsung Pay are the most popular.

9. Replacement For Tickets and Pass Cards

Whether by train, bus, or other public transportation. Your can use your NFC-enabled phone as a pass. As with existing contactless smart cards, bring your phone closer to the NFC screen to complete the transaction without using a card.

NFC is utilized as a different technology for authentication systems and for accessing mobile and desktop applications. Even though we will talk about NFC security vulnerabilities, NFC is a crucial safety feature thanks to two-factor authentication when used for good intentions. For instance, users may maintain an NFC compatible gadget near a matching detector after inputting their credentials.

Even while technology looks handy and straightforward, it is not without flaws, most notably in terms of security. A study found that an NFC smartphone might be used to hack an ATM merely by waving it. You may force an ATM to show an error message by waving your NFC smartphone over the ATM’s NFC reader.

This hacking attempt required only an NFC device — a smartphone – and a specially created Android program. ATMs do not receive regular software upgrades and frequently need physical access to update—which means that many of those machines are likely to stay vulnerable. Through some flaws, it is possible to infect point-of-sale equipment and subsequently exploit it to gather and send credit card data, modify transaction values without being discovered, and even freeze the equipment when ransomware messages are shown.

Corruption and Manipulation of Data

When a criminal manipulates the data sent to a reader or interferes with the delivered data, users may lose critical information or confront with corrupted data. To prevent this, communication should take place through secure channels such as using a VPN on your phone. Specific NFC chip enabled devices “listen” for data corruption attacks and prevent them from starting.

Interception assaults, similar to data manipulation, take this sort of cybercrime a step further. Between two NFC devices, a human works as a middleman, receiving and altering the information between them. This is a more complex and uncommon form of assault. To avoid this, one should pair devices in an active-passive manner. This indicates that one device receives data while the other transmits it, rather than both devices receiving and transmitting data.

Bug in the Android NFC Stack

An attacker can steal data without authorization over the Internet by abusing the NFC Service that supports Bluetooth.

For example, Nokia N9 has an NFC feature. Because this phone lacks “Confirm sharing and connecting,” if an attacker sends it a Bluetooth pairing message, it will immediately link with the device mentioned in the message, even if Bluetooth is not active.

If a smartphone is stolen, the burglar may conceivably use it to make a purchase by waving it over a card reader at a store. To avoid this, smartphone owners should exercise caution in maintaining a high level of security on their devices.

NFC chip technology will have a significant impact on the usability of mobile devices in a variety of contexts. On the one hand, NFC usage will improve the user experience with infinite services on a single device; on the other hand, it has a potentially dramatic impact on users’ privacy.

While it may appear that NFC would introduce additional security issues, it may be more secure than a credit card. If a user’s credit card is lost or stolen, a criminal can read the card and obtain the owner’s information. If the same individual loses her smartphone and but secured password management, the thief will be unable to access any personal information.

Through data encryption and secure channels (look at some great security apps for your phone here), NFC technology enables consumers to make purchases fast while maintaining the security of their personal information.