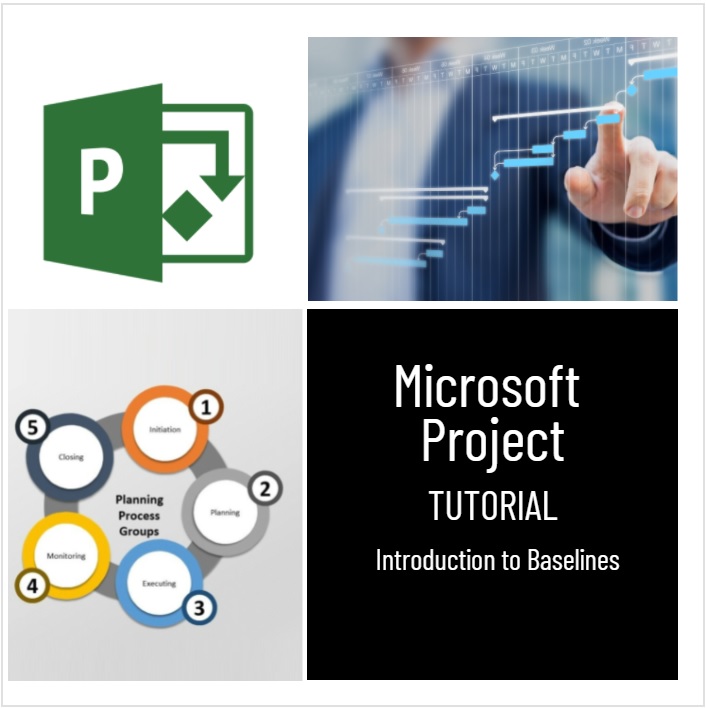 Microsoft Project (also known as MS Project) is a popular project management software tool almost in all industries. This Microsoft Project Baseline Tutorial, which is prepared to help you learn how to set, view and update baselines covers the following topics;

In the initiation and planning stages of any project, Project Managers are focussed primarily on planning by developing and communicating the details of the project before any actual work is commenced. When the work actually begins, the project moves into the Execution process phase which requires us to monitor what is actually happening in the project as the tasks are being implemented. Then in the final process phase, we can use the information gathered to complete a controlled closure which would include preparing closure reports and audits for the project stakeholders. 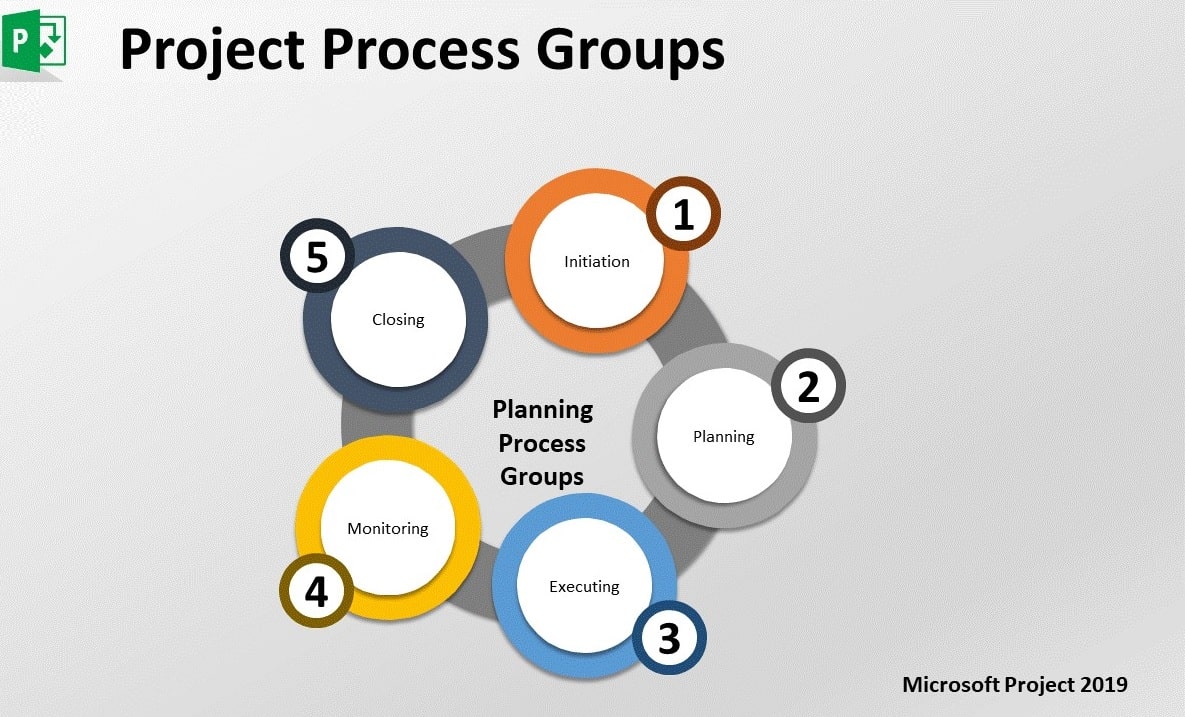 During the Execution Phase our focus is on the process of Project Tracking. This refers to all of the tasks involved in collecting, entering and analysing the actual performance of the project on an on-going basis. The project manager does this in order to be able to answer some vitally important questions which will be raised in relation to project performance such as:

Are tasks starting and finishing as planned?

Is the project being completed within the agreed scope?

Is all work authorised?

Are the tasks being completed within the resource and cost allocations set?

Before to demonstrate how to set, view and update baselines in this Microsoft Project Tutorial, let’s discuss what really a project baseline is.

In order to begin to track what is happening in a project the first thing that needs to be established is a Baseline for the project. Understanding how to set and maintain baselines helps the Project Manager to track and analyse your projects much more effectively. A baseline is really an agreed starting point from which to measure progress and will normally have been signed off by the Project Steering Group as part of the Initiation process. So, during the Initiation and Planning process phases, the Project Manager creates the project plan and then obtains agreement to proceed from all stakeholders on the basis of that plan. At that point the baseline for the project can be established. All progress will then be measured relative to that agreed plan. Any deviation from this original baseline is termed Variance, and it’s important that, as a Project Manager, you are measuring variances on an on-going basis. 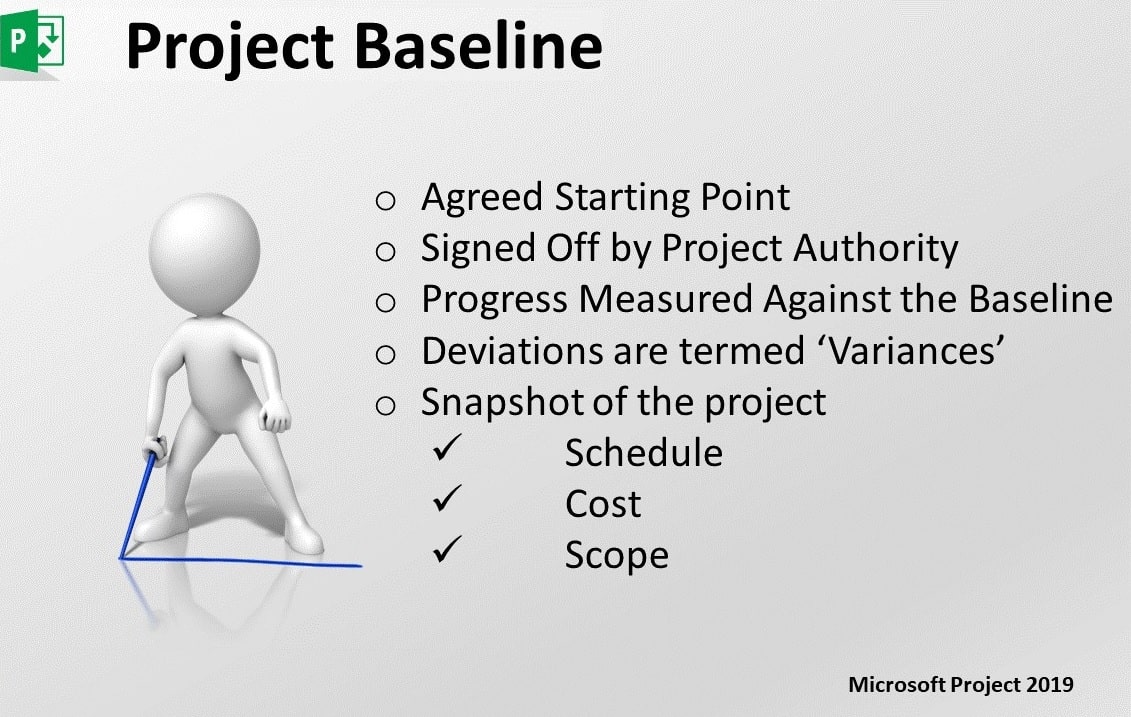 The project baseline is an original snapshot of the project in terms of schedule, cost, work and scope. The key function of the project baseline is that it can be used to see how much, throughout the project, we are deviating from the original schedule, cost, and scope. Remember that no project ever goes exactly according to the original plan. Circumstances change, resources become unavailable when required, finance may become a problem and, very often, the scope of the original project may change, particularly in relation to software development projects which are notoriously volatile in relation to adjustments to scope. If, however, we can track all of these changes then at least we have the facility to make the staff and other stakeholders aware that changes are required, can be justified, and that they can be implemented in a controlled manner. The details of requested changes can then be notified to the Steering Group for full consideration and approval or refusal.

What is the Purpose of Project Baseline?

In order for the project to be completed successfully and efficiently, it is important to create the baseline properly. The significance of the Baseline plan is immense because in monitoring and controlling the project we are effectively managing a moving target which keeps on progressing.  There is a need for a tool that can monitor the project progress relative to the planned activities. In this regard, the baseline can be optimal in offering a way for the project manager and team to observe the discrepancies existing between the planned work tasks and the actual tasks completed. When you create a baseline plan you are also creating a cost baseline which will be meaningful if we have established cost estimates for the resources used in the project. It is therefore important to have a cost baseline to compare the estimated costs with the actual costs incurred during the life of the project.

In any event you should save a baseline when you have developed the project schedule to the point where it has been approved by the appropriate authority for the project, most likely the Project Steering Group, and before you begin to enter actual values in relation to the progress of project tasks.

How to Set a Baseline in MS Project?

So, having stressed the importance of establishing a baseline for your projects, let’s now take a look at the way in which baselines can be manged in Microsoft Project.

When you set a new baseline, Microsoft Project stores the information about the plan at the point the baseline is created. Here you can see that, as well as the first baseline, we have the facility to set up to an additional ten baselines for the project. These are required because if there are, for example, major changes to the scope of the project, then it may be necessary to set a new baseline for the entire project.

When the Set Baseline radio button is selected, you then have the option to do so for the entire project or for a smaller portion of the plan which has been previously selected. You also have the facility to set up an interim plan, essentially to enable us to set a baseline for a section of the plan defined by the dates entered here. When you click the Ok button, Project stores the current values for start, finish, duration, work and costs into the corresponding baseline fields. The next time you open the Set Baseline dialog box the ‘Set Baseline’ box shows the date on which you set the baseline in Microsoft Project. 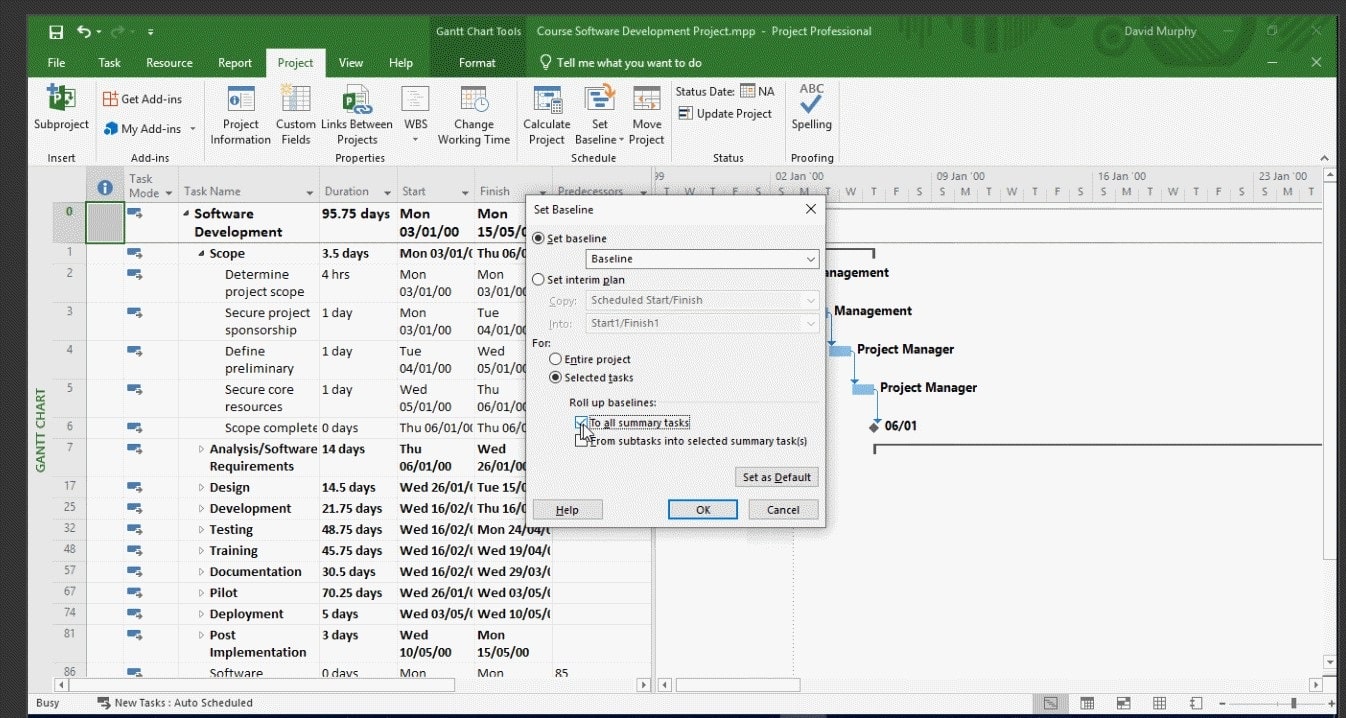 The first place where comparison information is available is in the Project Information Window of Microsoft. Here we can see the Statistics button which brings us into the Project Statistics dialog box. 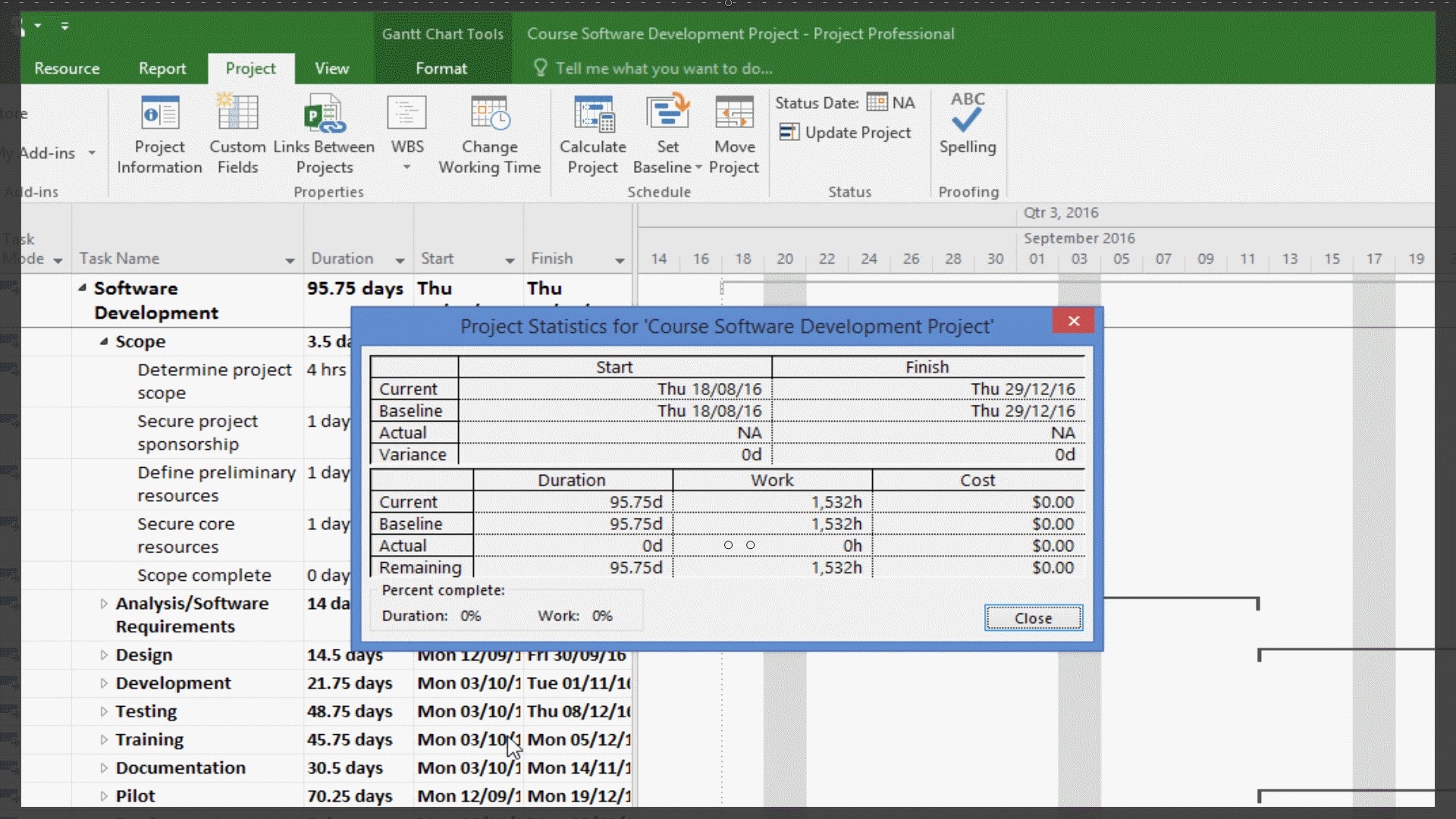 This provides an overview of the project from a current, baseline and actual plan perspective. When you set a baseline the contents of the current schedule fields are copied to the baseline fields. As we can see here there is currently no difference between them at the moment. There is no variance between them. The Actuals fields are NA because no actual progress has been recorded for this project as yet.

How to View Baselines in MS Project? 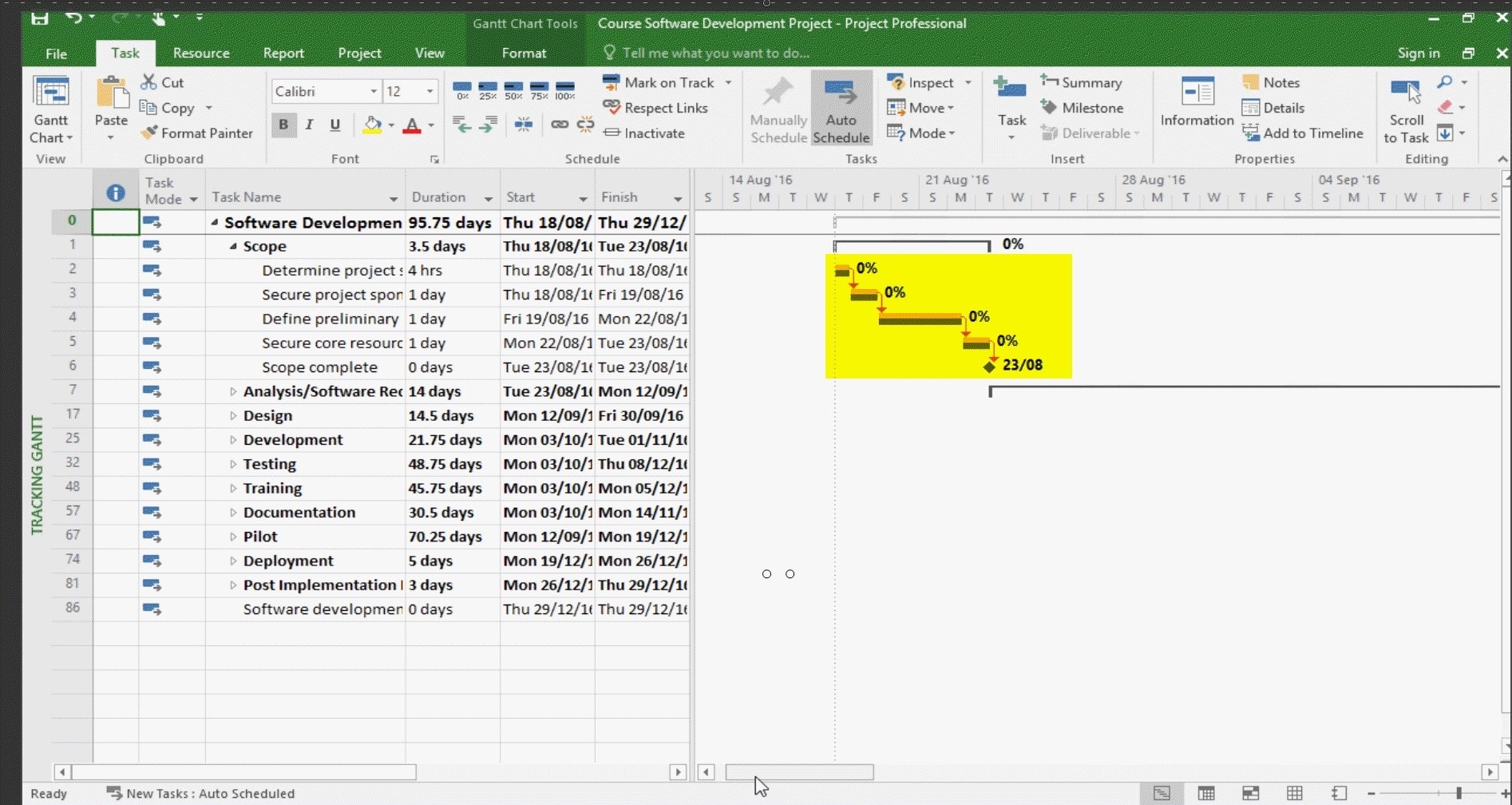 The bottom bars are the baseline and the top bars are critical if they are displayed in red, non-critical if they are blue. These represent the current plan. As you can see, they are currently the same length as we have yet to record any progress on the project. As you record changes which are different from the baseline the top bars will move while the baseline bars will remain the same. You can see that the percentage complete is shown at the right-hand side of the Gantt bars. This is one of the key project indicators and you will see how to update this in a short while.

How to Update a Baseline in MS Project?

In this section of our Microsoft Project Tutorial, we will talk about the function of columns while updating baseline.

So, having changed the way that the graphical indicators look, now you can also change the way the tabular data is displayed, and a very useful pre-defined table is called the Variance Table. If you go to the View Ribbon and select the Tables pulldown we can see the Variance option. In this view you can see the Start and Finish dates for the Actual and Baseline information and we can also see the variance between them. Again, there is no difference currently because we have yet to enter any progress information. 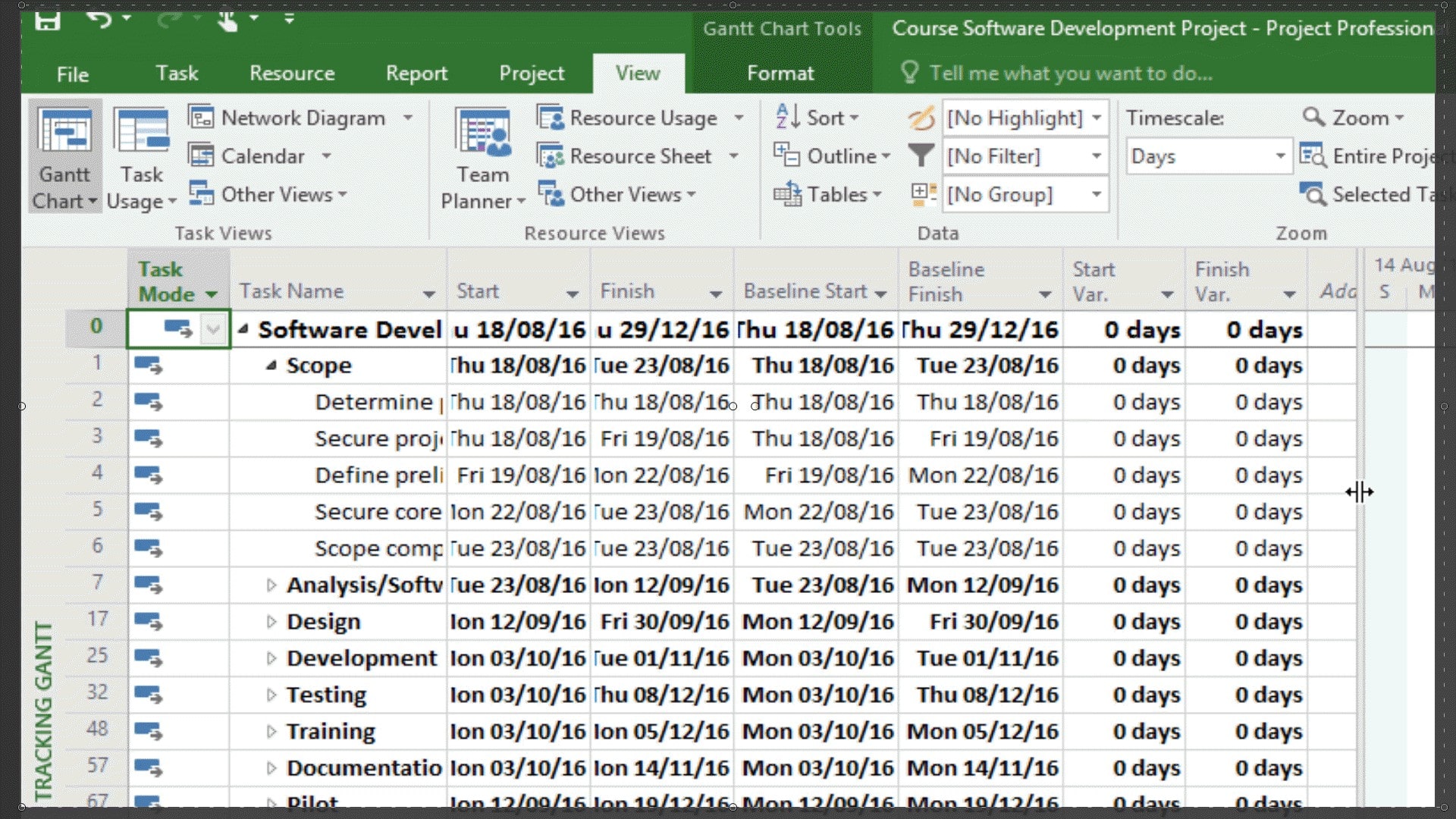 You can also modify this view by adding columns into the table while updating a baseline in Microsoft Project.

Let’s say we want to see the % Complete column. Then just highlight any column, say the start column, right click on the mouse and select Insert Column. An alphabetical list of the available columns (there are a lot) is presented and the % Complete is the first one. You can include any columns you feel may be useful for tracking, such as the Actual Start and Actual finish columns. One other view which might be useful to you if you have set multiple baselines in the Multiple Baselines Gantt. You can get to this by clicking on the More Views option from Other Views pulldown in the Task Views area. This view will display the different baselines simultaneously. 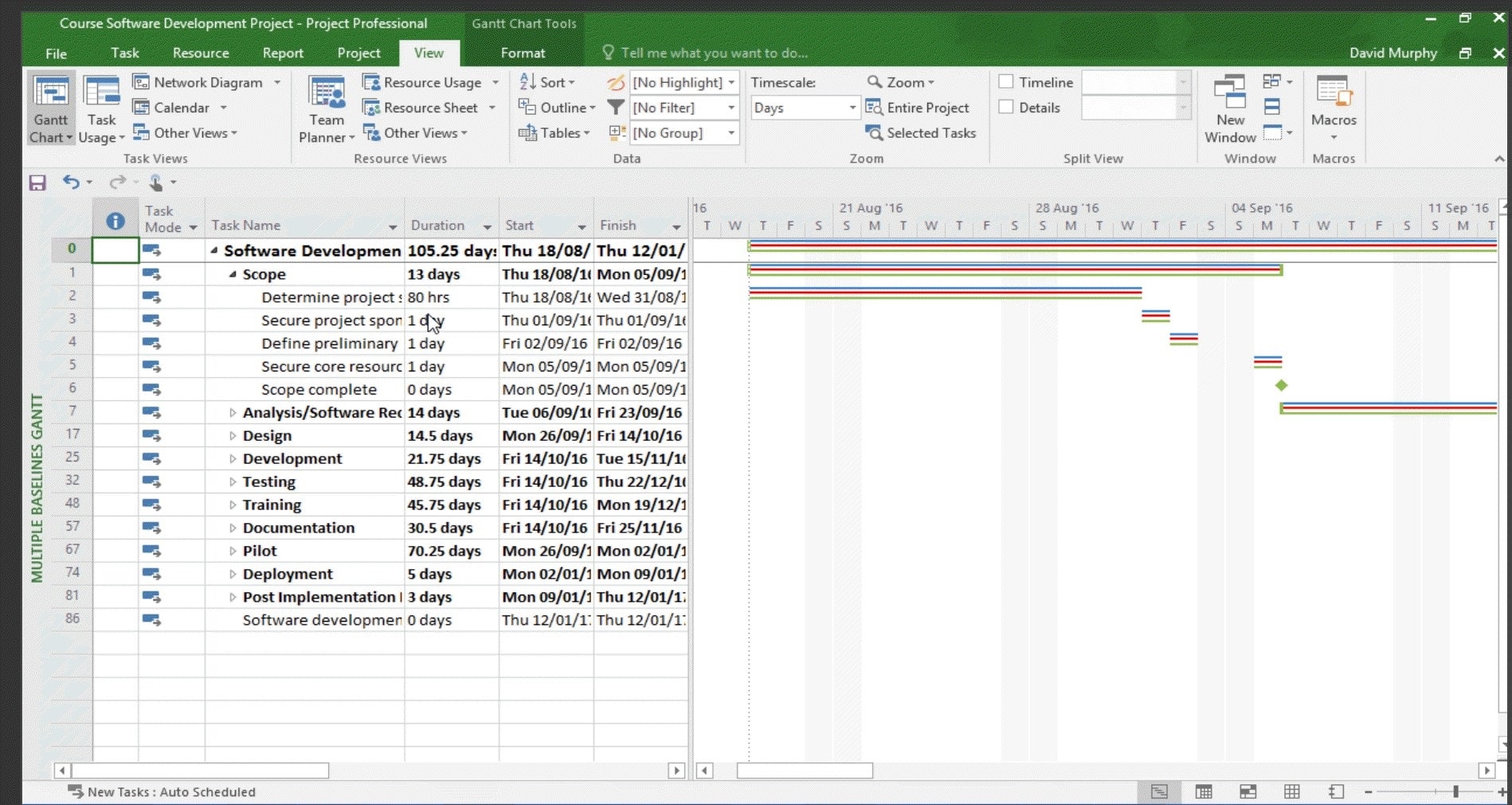 As the project progresses, you need to be able to update project plan information to reflect what is actually happening on a day to day or week to week basis. This takes more time on our part, but has the benefit of allowing us to have a real handle on how the project is actually progressing. We’ve already established why baseline comparison is so important in tracking project progress. Next we need to examine how we are going to capture the progress of tasks on an on-going basis and maintain information on how our projects are progressing. As a project manager it is your job to capture information from the project team members in relation to the tasks they have been assigned.

Microsoft Project provides a number of methods to record project progress. How you decide to use these methods is very likely to be determined by your organisations standards for recording project estimates. But that’s the subject of another article.

In this Microsoft Project Tutorial, we demonstrate how to set, view and update baselines. Please share your insights with us through the comments box below.

Dave Murphy is a Lecturer in Business with the Technological University Dublin and has over 20 years 3rd level teaching experience. He has developed multiple online courses in Project Management, Business Process Analysis and Microsoft Certifications.

Prior to becoming a university lecturer, Dave had 20 years commercial experience in the design and implementation of major IT projects for some of the world’s largest companies.

He holds a B.Sc (Hons) and an M.Sc Degree. He is also a Microsoft Certified Professional, has PRINCE2 Practitioner status and is a Microsoft Office Specialist Master.