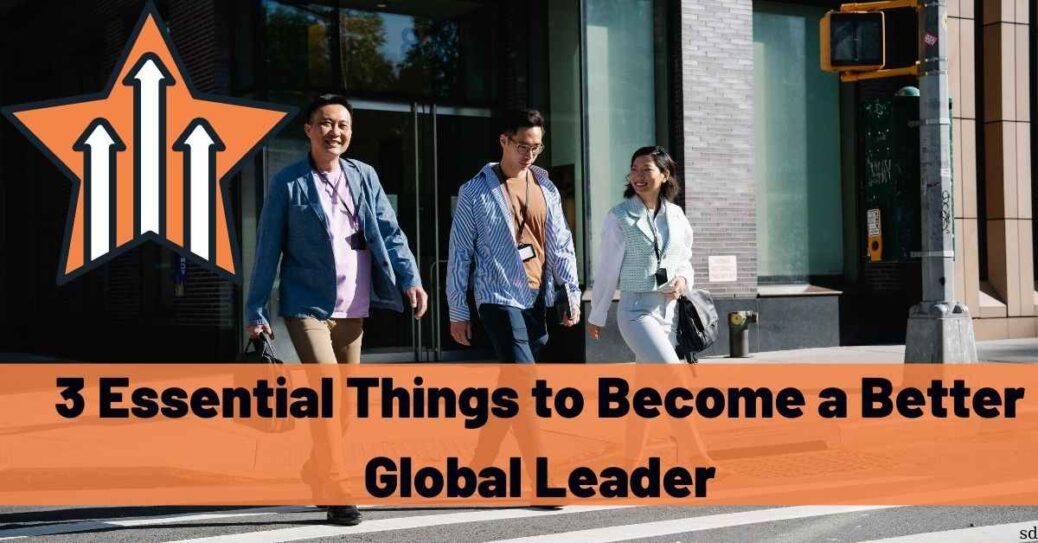 If your employer has a work-from-anywhere policy, you might have to collaborate with colleagues around the world in countries you’ve never visited, with people you’ve never met, and listening to accents you’ve never heard before. Over my 20-year career, I’ve contributed to and managed global projects. Here are 3 essential things that can help you become a better global leader.

English is the language of business, but not the first language for many people:

English was not my preferred language at school but I loved grammar, so I concentrated on learning this aspect, but didn’t enrich my vocabulary. When I had a 6-month internship in an international research center in Japan, I became aware of the power of English: I could talk to Australian, Canadian, and Japanese colleagues. I improved a bit. I still had an inner voice saying that I wasn’t so good in English, and that my accent was not good.

When I began to work on projects with British colleagues, this inner voice was reinforced: I remember once I received an email from a marketer (let’s call him David). It was very long and contained words I didn’t know. It took me some time to read it.

In the corporate world, we need to speak Globish – a simplified form of English for communication.

In some meetings, another colleague, Bryan, talked very quickly without articulating, making it hard to understand him.

Some of my British colleagues learned French, and when I talked to them in French, I slowed down and articulated clearly.

It requires effort, but this is the price to pay to create bonds and collaborate with your project teams. It’s a way to include people. Globish is a tool, not the purpose of the project: after all, we’re not taking a literature course.

Some basic rules of Globish are:

Despite all these efforts, you might not be understood because people are not used to your accent. When I first worked with Chinese colleagues, we had to familiarize ourselves with each other’s accents. During conference calls, I share a document where I write everything down. This also enhances transparency and shows the efforts I am making.

As a global leader, you need to spend time with your team to define the ground rules and best practices.

With the shift to a hybrid/remote world, voice and video call times have doubled and IM traffic has increased by 65%. We have all experienced more meetings than before, as people tried to recreate office life while working from home.

Some negative impacts of constant video usage are:

You can define the communication rules according to the type of meeting, as shown in the table below, for instance.

This is the hardest part if you haven’t worked or travelled in the country where your colleagues are based.

Asking questions is a way to learn and show interest, but sometimes you can find yourself walking a tightrope. Some well-intentioned questions may be seen as offensive. Microaggressions are defined as verbal, behavioral, and environmental indignities that communicate hostile, derogatory, or negative racial slights and insults to the target person or group.

For instance, once, I was asked: ‘How long have you been living in France?’ or ‘Where are you from’? When I answered ‘France’, I was asked: ‘Yes, but what about your parents?’

Before asking this type of question, you must take stock and ask yourself: How can the answer help me to collaborate better with my colleagues across the miles?

If the answer is negative, it’s better to refrain asking this question, at least not at the beginning of the collaboration.

A person’s name in itself doesn’t mean a lot: some people change their names. I’ve discovered a colleague of mine – whom I’ve known for almost 20 years – had a Polish mother. Some people are adopted, so asking questions about individual background may uncover personal stories they don’t necessarily want to share in the workplace.

By asking some questions, you may also project a judgment or send a signal that ‘our values are the best ones’.

If people talk freely about politics and religion in your country, good for you! But in some countries this is not ok, and other topics may be similarly taboo. For instance, in France we don’t speak at all about money and salaries in the workplace.

You may be open to answering any question, but other people may not be – not only because of national cultures, but also because of their individual personalities. It doesn’t mean people are less open.

This doesn’t mean you must refrain from asking any questions. It means you have to stick to non-judgmental questions, especially when you are building the relationship.

How to Become a Better Global Leader: Last Thoughts

I’ve been working with colleagues based in African countries since 2014 and I’ve not visited most of these countries. Every time I talk to a colleague in Africa, I try to ask some open questions like: do you eat outside during lunch time? Do you have fixed working hours? I’ve noticed you have three names, what name shall I use? What languages do you speak? Are there any upcoming festivals or bank holidays in your country?

Leading global projects and working in global teams mean building bridges to deliver projects in a collaborative way. You’ll have to juggle with communication methods, you’ll face some challenges, and you’ll have to sort out misunderstandings. However, patience, effort, and respect will pave the way to a better project outcome and a rich and rewarding human experience.

Yasmina Khelifi is a French telecom engineer and project manager with 3 PMI certifications. She has been working in the telecom industry for 20 years. She is a passionate volunteer at PMI. She is also a regular volunteer blogger on projectmanagement.com and a volunteer international correspondent at PMWorld Journal. She is the host and founder of the podcast “Global Leaders Talk with Yasmina Khelifi“ . Yasmina can speak 6 languages and has a MSc in Mobile Telecommunications. You can connect with her on Linkedin, visit her website and subscribe to her monthly newsletter.