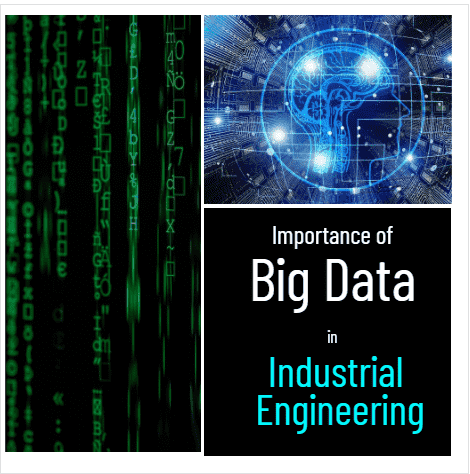 For those unfamiliar with it, industrial engineering (IE) involves integrating all of the specific components involved in developing a product or service, including materials, information and workers, into one optimized system.

The goal of the industrial engineer is to ensure that these systems they create run in a highly efficient fashion and that the amount of wasted resources as a consequence of said systems are minimal.

As you can imagine, this industry is one which looks very different now from how it did when it originated in the early years of the 20th Century. And this is in large part due to the rise of digitization.

Industrial engineering is going through a very substantial period of digital transformation and that change has sped up dramatically in the last few years and will continue to speed up as time goes by. Processes which would have once been defined by written documents are now primarily conducted online.

So with that in mind, let’s discuss something which is important to Industrial engineering and is also going to be affected by this period of transformation:

Big Data is a relatively new concept, and it refers to datasets which are too large for traditional database software tools, which are usually quite diverse and which will continue to grow at an exponential rate.

We’re talking data which would range in size from a few dozen terabytes to multiple petabytes and when discussing Big Data, it is usually broken down in what is known as the 6 Vs, being volume, variety, velocity, value, veracity and variability.

In general, Big Data encompasses all kinds of different forms of data including video, audio, spreadsheets, text and others. While it sounds like something which is out of control, Big Data is actually extremely useful.

As you can imagine, utilizing it is massively important for effective industrial engineering. As mentioned early, Industrial engineering involves planning and optimizing and good engineers will have studied things like maths and chemistry in order to ensure efficiency, but the end goal is a better product or service.

Extracting information from Big Data is conducted through a process which is known as mining. This is achieved through analyzing large amounts of data and will require an understanding of statistics as well as artificial intelligence.

Big Data mining can give an industrial engineer a ton of information which can offer great insight into a number of different areas which could be of use when developing a good system. One huge benefit is that it can help to focus in on product defects and inconsistencies in manufacturing.

In a traditionally sized database, information can be limited. Developing a product or a system will produce an awful lot of data, often too much to be contained within those smaller databases and as such, problems do sometimes go unrecorded.

And with this in mind, let’s consider transparency on a grander scale. The more access to data that you have, the more transparency that can be offered to the other stakeholders involved in your projects.

It can be difficult to ensure that everyone trusts each other when everyone has different tasks, each of which generate their own large selections of data, which might not be as easily accessed by the others.

If you can make it clear that you will be mining Big Data, you are more likely to earn the trust of the other stakeholders and can also be more assured of your trust in them. The single-source of truth offered by Vista Projects truth-based industrial engineering approach is especially helpful in this regard.

You can also track every single detail of your manufacturing process. When it comes to minimizing waste, this is essential. Industrial engineering involves balancing an awful lot of different plates, and all of the different individual parts of the process are involved and keeping track of all of them is almost impossible without Big Data mining.

Preparing for the Future

Let’s also consider the fact that you can use Big Data Analytics to track your project. This can help you to better forecast completion and sales of the product as well as display areas in which improvement is necessary.

At the risk of sounding like a broken record, I’ll reiterate once more that data of this magnitude shouldn’t be intimidating, it should be freeing. We’ve discussed above how it can be used in terms of the project itself, but it can also help in regards to what happens after the project.

Once a product is ready for distribution, even more data will spin out from the sales. And we’re not just talking about the amount of money made or the number of units sold, we’re also talking about locations where it’s more popular and what age groups are the most common buyers.

There will be an insurmountable amount of this kind of data which will ensure patterns can be recognized and this knowledge can then be considered and applied with future systems involved in the same products.

With advanced and improved technology, traditional database softwares have of course gotten bigger and can hold more, but we’ve also seen a rise in the sheer amount of data present and so Big Data hasn’t ceased to be prevalent.

In order for Industrial engineering to maintain its effectiveness as we progress even further with technology, Big Data mining must remain a huge priority.

Andy is an aspiring writer of both fiction and non-fiction and has an interest in business with a particular emphasis on the global oil and gas industry.