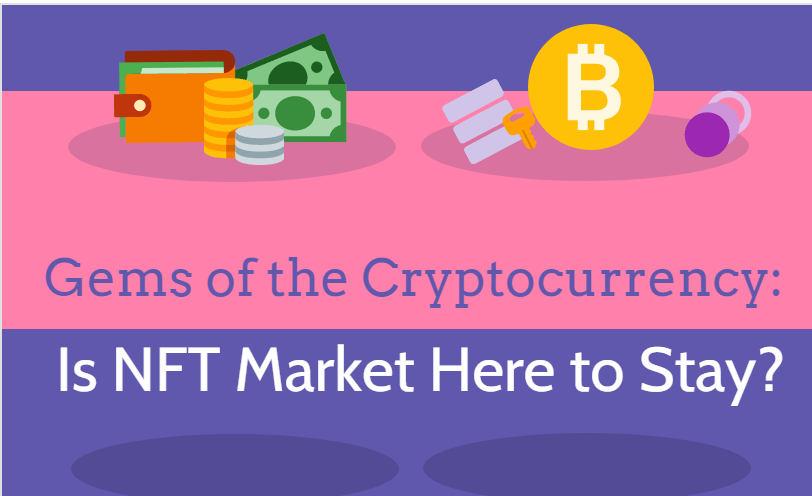 Gems of the Cryptocurrency: Is NFT Market Here to Stay?

Over the past decade, the world witnessed major changes, from the social media revolution to the global pandemic that reinvented almost all the social norms and living patterns. When it comes to the monetary world, the biggest change took place with the introduction of blockchain technology, which eventually paved the way for cryptocurrencies. Threatening the centuries-long reign of fiat money, cryptocurrencies took everyone by surprise with their potential, versatility, and efficiency. However, their striking impact was not limited to the monetary world. The invention of the NFT market proved to us all that cryptocurrencies can be competently utilized in almost every field, from artistic ventures to gaming. Demonstrating to all that from NFT crypto art to NFT art finance, the journey of a single NFT is worth watching.

Although they have been around for a while, 2020 has been the year that Non-fungible Tokens (NFTs) gained mainstream popularity with millions looking for a way to take a glimpse of it. During the year, the NFT market tripled, demonstrating that it is a force to be reckoned with, alongside its pioneers such as Bitcoin and Ethereum. In recent times, NFTs attracted the attention of the skeptics as its market witnessed fluctuations in early 2021 since every peak is unavoidably followed by a slide. Currently, public opinion seems to be polarized when it comes to NFTs. While many swears by these precious tokens, others argue that the hype is baseless and temporary.

The unparalleled world of the NFT market

NFTs are one of the best ways to take advantage of blockchain technology. They enable people to buy any virtual item through digital tokens under the surveillance of the blockchain system. That is to say, you can buy and sell collectibles, games, art pieces, memes, and even academic papers through NFTs and your transaction would be fool-proof since they can be traced on the blockchain system. NFTs guarantee that you are the sole owner of the item you buy, which is a revolutionary innovation and make the NFT market so unique and preferable compared to other forms of transactions.


It all started back in 2012, in the early days of the NFT’s predecessor, Bitcoin. Eager to explore the technology it is freshly using, Bitcoin introduced the concept of colored coins as symbolic reflections of various real-world items, from collectibles to company shares. This initial primal and yet unusual concept opens the doors of possibilities to adventurous minds. Two of those minds were Kevin McCoy and Anil Dash, who created the first-ever NFT only two years following the introduction of the colored coins. McCoy and Dash linked an art piece to a digital token for the first time and made history in the New Museum of New York City.

Some of the other names that had the inspiration to come up with some NFTs at the time were Robert Dermody, Aam Krellenstein, and Even Wagner, who are the founders of the Counterparty that enabled digital items to be generated and swapped on Bitcoin.

In 2015, Counterparty cooperated with the gaming company Spells of Genesis and enabled game assets to be exchanged as a form of NFTs. Again in 2015, Ethereum came up with the first NFT project of the blockchain world and presented Etheria. In 2016, memes started to be a part of the cryptocurrency realm through the NFT market and, once again, Counterparty was the trailblazer. The Rare Pepes meme became the one that popularized the transaction of memes as digital assets. The memes are followed by the CryptoKitties craze in 2017, which was a game to raise your digital kittens on the Ethereum.

Finally, the media realized the major capacity of the NFT art finance and covered CryptoKitties widely, making them famous outside of the crypto circles as well. This insertion of the games to the NFT crypto world was subversive as it set the stage for other formats such as “layer two” and “hot potato” games.

The games are succeeded by the art pieces that are transformed into NFT crypto art. In 2018, Kevin Abosh has become the first artist to ever create NFT crypto art and auction it for millions. After this initial attempt, many artists worldwide take a step into the NFT realm and enjoyed creating unique pieces on various blockchain systems. From that point on, the NFT market turned into an unstoppable force in the crypto universe.

In 2020 NBA TopShot was initiated and made NFTs sudden household names for the regular people. The market value of the NFTs was finally beyond the $250 million threshold and people could not get enough of it. This popularity is backed by the major digital art market OpenSea’s insurgent alteration of removing the mandatory payment of gas expenditure from the NFT crypto art creation process. This meant that anyone and everyone could create NFTs for free.

The future of the NFT market: Doomed to fail or ready to shine?

Since 2020 was a highly successful year for the NFT market, when 2021 could not reach the same level of success for a while, it caused many to question whether these hyped tokens were just a bubble. Just like in all markets, when the trust of the potential buyers is lost, the value of the item is lost as well. NFT art finance witnessed a similar situation back in June when the NFT  dealings decreased 90% in contrast to the former month. The news was shocking for the investors and a while, it was assumed that the days of the NFTs are over.

Nonetheless, the NFT market proved everyone wrong soon after. The Q3 data of 2021 demonstrated that NFTs’ sale volume was beyond $10.7 billion. Because the Q1 data was only at $1.2 billion and Q2 was $1.3 billion, it is clear that the NFT art finance had just gone through a rough patch in the first half of 2021 and are now, once again, enjoying their monumental achievements.

Today, NFTs are being used in many fields, while their potential as secure personal documentation areas, virtual reality creation platforms, in-game shopping options, and collectible properties are still being explored. It is almost certain that just like other cryptocurrencies, NFTs will also witness some market fluctuations in the future, and worry everyone. Yet, this does not mean that the NFTs’ days are numbered. On the contrary, NFT crypto art is here to stay as they transformed our understanding of transactions, art, games, and the value in the digital world, with many more to discover.